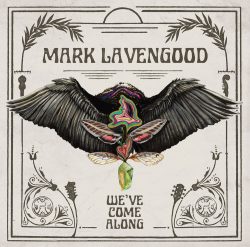 If americana is the world, then bluegrass is Austria, impossibly beautiful and incredibly conservative. Often I find the genre to be more about the preening and display of beautiful musical plumage and less about making music that really matters. Thankfully Lavengood is more musically dishevelled, there are loose threads that can be pulled and there’s plenty to get to grips with. He certainly has some chutzpah, opening with the title track which weighs in at 7 minutes and sets the tone for the rest of the record – there is some really excellent fluid playing and there’s also space for digression, for pause and for the imperfect. It varies in pace and texture and is happy at times to use jazz or rock influences. He shows off his genre chops on the standard Ol’ Slew Foot and Ralph Stanley’s Bound to Ride but in many ways they are the least interesting pieces on the record.

There are a couple of short Interludes for L.A which satisfyingly sound like the best of Ry Cooder’s soundtrack work. There aren’t many Bluegrass records that name-check the Velvet Underground as Three Day Blow does nor do they tend to dissect a bender as this song does, the dobro, mandolin and banjo all chattering away. Somehow it conspires to have a chorus that is at once a downer and also uplifting. The cover of Hungry Heart starts out at quite a lick and feels like it’s one of those novelty covers in a different style, but it settles down and the instrumental section really nails the song; each instrument gets to have its time in the spotlight so you can still glimpse the melancholy at the heart of the song.

Listening to the closing America I thought it was a cover of a Woody Guthrie song but it’s a Lavengood original. It dissects the contradictions at the heart of the American dream near as well as Woody ever did. This is a record which at turns brilliantly picks at what Bluegrass can be and at others retreats into genre. It’s a brave gambit by Lavengood and results in a record that has more highs than lows.

Lavengood’s Bluegrass Bonanza serves up, well you know what it serves up.