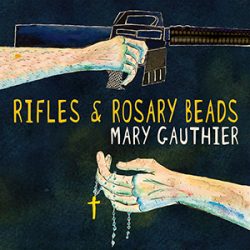 Mary Gauthier wrote this record with US Army veterans as part of a program to help those affected by their experiences of war – with those for whom wars do not stop when they come home, those for whom the scars and the horrors endure. These honest raw songs push right into the dark hearts of these veterans, the problems that war brings and the wars they continue to fight once they get home, also giving a voice to the wives and partners who also serve but are unrecognised, those who deal with their broken loved ones. There’s a line from the opener Soldiering On, which sums up the record: ‘what saves you in the battle can kill you at home’. The song drives this home with slabs of drums, guitars and strings, teetering on the ugly as befits the subject matter. These aren’t simple issues and Gauthier never treats them as such; this is a nuanced stripping bare of the problems faced by veterans.

Each song features a different perspective and a different narrative voice, all full of detail, the horrors hovering just out of view, the camaraderie, the absolute reliance on each other that comes across on Got Your Six. The War After the War deals with those having to support those suffering from PTSD, the ‘invisible war after the war’, for which there is no training, scant support and the lack of understanding of what it takes to live in those circumstances. ‘I’m a soldier too, just like you … I serve unseen, caught in between my pain and the pain of someone else’. It really is heart-rending, the pain almost palpable.

There’s some beauty in Bullet Holes in the Sky, the imagery of the Veteran’s Day Parade and the music with the sweet piano chords like sunlight streaming out from behind the clouds, the song dealing with the conflicted emotions of a veteran attending the parade. It’s Her Love is a love song unlike most, this is the kind of love that is strong enough to deal with the nightmares, the pain, that stoic unwavering love, to stand by someone, ‘when I’m broken and I push her away, she fights her way back, she’s with me to stay, when the dead and the dying are all I can see, she’s my beautiful anchor, to reality’ and with Gauthier’s superb performance the song has me shedding a tear.

This is a record that shows the power of art to help to heal and to help to find a way to express the inexpressible. Each song is a mini-masterpiece: there isn’t one moment that doesn’t ring true. It’s a record that humbles you to hear it with its unheard stories. It is certainly Gauthier’s masterpiece, and a record that genuinely has helped to change lives, a wonderful piece of art.

Wonderful important work on the enduring damage of war