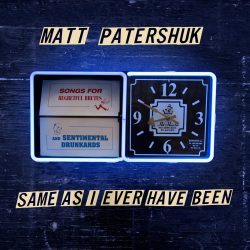 The back cover portrait photo for Matt Patershuk’s new album may make you recoil in horror at the super clichéd Americana-ness on display. Farmyard, haystack, dogs, Telecaster, beard and hat. All are squeezed in. Fear not – they’re actually his own dogs and his own rural Alberta farmyard. Safe to assume the guitar and beard belong to him too. Despite this early alarm, Same As I Have Ever Been is a damn fine record.

Patershuk delivers hard-edged country and/or blues with a gravel-gargling voice, perhaps Tom Waits’ more melodic cousin, that can also deliver weary pathos. He’s assisted expertly on Gypsy and other, more gentle tracks by Ana Egge. The addition of saxophone and Hammond organ into the instrumentation is refreshing too. Lyrically Patershuk is a league or two above the clichés one might expect from any continuation of the previously mentioned ‘worrying’ sleeve photograph. Good Luck is a wry tale of a fortune charm advertised in a trashy magazine that’s sure to turn his life around. Memory And The First Law Of Thermodynamics is the saddest of true stories about his sister, killed by a drunk driver. It’s clever, beautiful and heart-breaking in equal measure. Same As I Have Ever Been is a loving lullaby of stoicism and dependability. Waylon and Kris spring to mind when comparing Patershuk’s music, and to make that comparison isn’t fanciful.