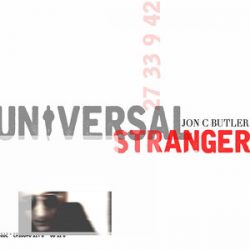 Jon C Butler has had a lengthy career with his band Diesel Park West most noted for their critically acclaimed debut ‘Shakespeare Alabama’ released some 25 years ago. His newest output and debut solo album ‘Universal Stranger’, puts a modern spin on a retro sound – using lyrics and themes from 2017 against a backdrop of 70’s or 80’s sounding production and as a whole, that sound works. First track When The Walls Went Down is reminiscent of Dylan’s work with the band, kicking out with a purposeful almost spoken-word vocal and slides into the more melodic Each Other a steady paced song that is lyrically, highlighting the importance of realising we are all in this together which seems to be a message threaded throughout the record as a whole.

Whilst not as lyrically prolific as Dylan, the comparison is an easy one to make from the vocal delivery and the socially aware content. The Man Who Couldn’t Love sees Butler make a brief foray into crooning and is the first of two occasions on the 11 track record that we see him step outside of his comfort zone, change up the pace and experiment with both a different vocal style and to incorporate some piano into proceedings. From fifth track and album title track Universal Stranger the album starts to repeat itself and although the quality of songs on offer here is high, they feel slightly like the same songs from the beginning of the album rehashed, changed around slightly and given different lyrics and unfortunately, the album is at risk of being repetitive at times. Other album standouts are Ghost In My Heart, a high energy number with a brilliantly infectious chorus that is sure to become a live favourite, if not already and closing track Would Have Should Have, the second of the aforementioned melancholy ballads on the record.

Overall, Universal Stranger would have been better if it was kept short and punchy as so many of the tracks on offer are great, it’s just that after you’ve heard the first half of the album, the second feels like déjà vu partly due to the pace of the record and partly due to the lack of diversity between each of the tracks. Luckily for Jon C Butler, he has a knack for producing solid music so although it feels like you’ve heard it before, it’s still a great listen start to finish.