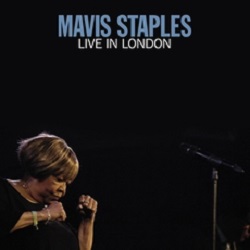 At the age of 79 it would be perfectly understandable if Rock and Roll Hall of Famer, Americana Grammy Award Winner and overall musical legend Mavis Staples were to make a move towards taking it easy, it’d be perfectly understandable – but not the case. Over the last few years she has released critically praised albums working with Wilco main man Jeff Tweedy as producer and co-writer of songs. And with a heritage of music back over, incredibly, six decades it is all the more remarkable that this new live album relies on the recent material – this is no “greatest hits” nostalgia package, this is an artist creating new music and taking it out to live on the road.

Mavis Staples has a huge and recognisable voice – power-housing through the songs that were recorded at London’s Union Chapel – a venue that she has described as “the best place in the world to sing” and it certainly brought out fine performances both from Mavis Staples herself and her small but versatile band. They can dial everything back for the soft intimacy of a song like ‘You Are Not Alone‘ which offers consolation in a time of heartbreak “A broken dream / A broken heart / Isolated and afraid / Open up – this is a raid / I want to get it through to you / you’re not alone”.  And then they can move easily to the uptempo hand-clapping of ‘No Time For Cryin’ ‘ which implores the listener to put their shoulder to the metaphorical wheel ‘cos the world ain’t fixed yet – it’s a 21st century call to arms for civil rights and compassion with Mavis Staples taking the rich and powerful to task “Motherless children, yeah, oh what a world we’re living in / it’s a mean old world that we’re living in / taking babies away from their mothers!/…/I’m going to march right up to that big house / we got work to do y’all, we got a job“.

It’s not all totally serious – Curtis Mayfield’s ‘Let’s Do It Again‘ is a slow and sensual groove, with Mavis Staples reaching way down to her deepest registers to deliver a message of pure desire for ‘Sweet love in the midnight/ Good sleep come morning light /…/just getting good love / Do it, do it again!“. And at the drop of the hat you can find the mood change to full on rock and roll as on ‘Love and Trust‘ written for Mavis by Ben Harper – new music that has had her say “I love that song, it’s a beauty I’ve been sending a message of love and trust since the Sixties, and I’m still searching for that.” And nothing embodies that sentiment better than the closing track ‘Touch A Hand‘, which grooves out over six minutes, giving Staples time to introduce her band before imploring her audience to “reach out and touch a hand / make a friend if you can“. It’s life affirming music and confirms beyond any doubt that Mavis Staples is an artist still operating at full power – gentle, tender, raucous, embracing, preaching the good fight and delivering a message of love.  Can we actually ask for more than that ?