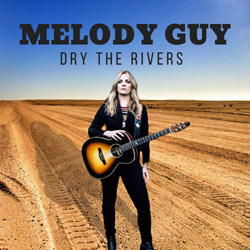 A Nashville based singer songwriter who racks up the miles as she travels the country playing gigs here, there and everywhere, Melody Guy proves to be an attractive listen on this tenth album of hers which has some country soul and Nashville tears in its grooves. Recorded in Nashville, the album is both tough and tender with some of the songs reflecting rough times in the singer’s past but she can look back and capture some good memories from bad times as on the Dobro and accordion speckled jauntiness of ‘I Can’t Live There’.

‘I Can’t Live There’ is the standout song here but a close second is the title number which again features Dobro on a song which finds Guy casting off her demons. She has a finely attuned front porch feel on ‘Tell Me I’m Not The Only One’ and on ‘Goodbye’ which has a slight Celtic air as it waltzes along. On ‘Mercy Only The Lonely’ she heads into George Jones territory with a lonesome pedal steel dripping tears into her beer. Elsewhere she forges a fine southern soul sound replete with churchy organ and a muscular backbeat. ‘Strong’ strives for the emotional intensity of a Gospel song and by and large succeeds while ‘Carve Another Number’ ratchets up the southern groove with some wicked slide guitar on a song which recalls the earthy tones of Texan singer Martha Fields. While Guy isn’t treading new ground here, if you’re partial to gutsy women rising above adversity then Dry The Rivers is well worth a listen.