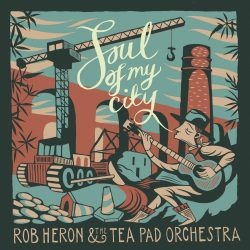 Rob Heron and the Tea Pad Orchestra go out of their way to make it hard to pigeonhole them to a specific genre. Their fourth studio album, ‘Soul of My City’ is a case in point. Almost vaudevillian in approach, there’s yodelling sitting neatly beside ragtime blues and country. The only nod to being categorised is on their own terms; they’ve been known to claim the term ‘Geordie swing’ to describe their eclectic mash up. So there we have it – the cat’s out of the bag. Even though they’d be at home strumming on a Mississippi steamboat, Rob and his Orchestra live in Newcastle upon Tyne.

In fact, title track ‘Soul of My City’ is a direct response to the over-gentrification of the Ouseburn (depicted on the album artwork), an area of Newcastle known for its support of the arts. The song sounds very film noir. Imagine the theme tune to a seedy ’40s  detective series. Heron lambasts “Mr Town Planner” who is selling off his beloved recording space “for a dirty pound.”

With this album, you never know what you are going to hear next. From album opener, a perky, jivey ‘Let’s Go Back in Time’ where Heron laments modern music: “That 21st century music, man, is watered down”, to songs that would sit comfortably in the ’50s (‘There’s a Hole (Where my Pocket used to Be’) and the all out yodelling on ‘Lonely Boy in the Dole Queue’, it’s an eclectic selection for sure.

The cheeky ‘Life’s a Drag’ sees Heron using some classic call and response when he proclaims coquettishly, “Well boys, there’s something I need to tell you” and the Tea Pads reply with “What is it Bob?” When he reveals a new-found love of wearing ladies’ clothing, they answer with a wolf whistle. The song is a joy: upbeat, well-polished skiffle.

There’s a healthy dose of heartbreak and drinking to be had here too. ‘Holy Moly (I’m in Love Again)’ and ‘Drinking and Carrying On’ are lyrically strong and a throwback to a more innocent age. Both are tightly delivered rockabilly style by the Orchestra’s backing vocals, harmonica and accordion.

The album ends with ‘Double Meaning, Double Entendre,’ a delightful and playful take on the blues with Heron singing about “chipolatas” and “10-inch pepperoni pizzas” in his self-styled “innuendo, sub-text blues”.

With all these different styles we could be facing an album that doesn’t know what it’s trying to be. That’s not the case here. Rob Heron and the Tea Pad Orchestra have successfully created a romp through vintage Americana styles and given it a modern, good time twist.

Ready to jive to some Geordie swing?