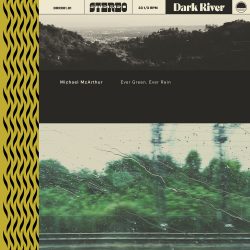 Michael McArthur is no stranger to the Americana and Folk world. He’s been releasing singles commercially since 2016, however, has never released anything other than that. Thankfully, McArthur has finally graced us with his full first length release. The album title originates from the idea that you can’t have green without rain and that you must withstand hard times to be rewarded with the good. This concept really sets you up for the journey that the album takes you on. McArthur teamed up with producer Ryan Freeland (Ray Lamontagne, Bonnie Raitt). The pair recorded this album at United Recording Studios, Los Angeles, in the same room that both Frank Sinatra and Elvis once recorded some of their hit songs.

‘Earth and Space‘ kicks off the album with a busy arpeggiated synth laying down the platform for some spacious guitar chords. The lead line played by the guitar gives off an anthemic vibe before leading into the soft acoustic guitar of ‘We Live and We Die‘. McArthur’s voice is gracefully welcomed after the instrumental album opener. Low in tone and soft in timbre, his voice really cuts through and makes a statement instantly. The following track, ‘Wild in the Blood‘ is a really beautiful track that, instrumentally, leaves a lot of room for his voice to take centre stage. Reverberated drums and a soft drone that sit underneath his vocals for the whole of the track successfully create an almost hypnotic atmosphere.

‘Prisoner‘ is a complete contrast to the first three tracks. This track really drives with catchy melodies throughout the verse and chorus. A real rocker. ‘Elaine‘ is the first “ballad” of the album. One of two singles released from this album prior to its release, and you can see why when McArthur almost cries out “Maybe love is all I need”, a really memorable chorus that sticks with you even into the following track. Towards the back end of the song, the pedal steel adds some really nice flavour to the verses.

McArthur throws in some noticeably country influences on the track ‘Warmer Months,’  with twangy, gritty guitar tones and a bouncy and almost swampy rhythm. On the bigger and louder sections of this song, his voice doesn’t quite have the same cutting edge that it does on the softer tracks, especially when hitting higher notes.

The first track released as a single for this album was ‘Save Me From The Fire‘. The main body of this number is in complete contrast to the rest of the album and very refreshing to hear. McArthur sticks to his guns for the chorus, with his signature catchy hooks and melodies. The drums are a lot more prominent in this track with syncopated grooves in the verse and chorus adding a completely different feel to anything that’s come before. The record finishes with title track ‘Ever Green, Ever Rain‘. This album almost goes full circle with this song, returning to the soft and spacious sound that it started with, McArthur’s voice once again taking centre stage with its soulful and soft tonality. A lovely way to end the album.

This release takes you on a much-needed musical journey, covering different feels and styles throughout, whilst also being very easy to listen to and making you want to put it on repeat all day long. Ryan Freeland has done a magnificent job as producer, creating a cosy and warm sound that makes for a really comfortable listening experience. You can really sense that this album would be beautifully recreated live in the setting of a large open space or an old church.

A beautiful debut release that leaves you wanting more