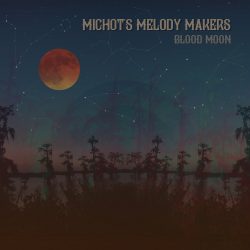 Michot’s Melody Maker’s are something of a supergroup. Led by Lost Bayou Ramblers frontman and fiddle player extraordinaire, Louis Michot and backed with a selected cast of talented musicians and a slew of special guests, the Grammy-award winning artist, has continued his modern homage to his Louisiana roots and the traditional music of the region with ‘Blood Moon’ and the result is an intriguing, eclectic collection of songs drawing inspiration from not only the Cajun genre he has been linked to throughout his career but there are hints of other influence throughout too such as country, rock and roll and rockabilly. All of these factors contribute to the unique sound of the record which can at times be alienating but more often than not, the result is outstanding.

For those not familiar with Michot or his previous work, he comes from Louisiana where the traditional language is Cajun French or Louisiana French and Michot himself, having been renowned for his contemporary spin and reworkings of the Cajun sound, almost always sings in this language.

The record begins with ‘Two-Step de Ste Marie’ a song led by a thumping drum sound and an infectious fiddle introduction, and it is clear the record has an energy about it with the rhythm section taking prominence and this simple but effective set up complements the tone of the song perfectly. The introduction of the vocals, at first could be quite disarming to English speakers and could potentially alienate listeners who prefer a deep-dive into the lyrical content of a record, however, once the song is fully underway, it is clear that it doesn’t matter if the language is English or Louisiana French or any other language for that matter as the magic is in the melody here (the clue is in the name!). This is something that is prevalent throughout all of the tracks on offer here – melody is key to the appeal of this record as it is the layered instrumentation and the sound as a whole – and the way each of those aspects interlink to create something which can be interpreted by each individual hearing it through the sound of the music and not through the story told by the lyrics, and is a testament to the power of the music itself.

None of this is to detract from the power of the vocals as in tracks such as ‘Dans Le Pins’, the emotion in Michot’s voice as plain as day and the music only serves to heighten that power as the vocals and instrumentation bounce off each other to create a real sense of atmosphere on the only slow track on the album. For the most part of the album the group focuses on loud, fast and frantic tracks with the aforementioned high energy and the listening experience is incredibly uplifting for it. The band plays their hearts out from start to finish with the exceptional fiddle playing really taking centre stage throughout and the result is that the record is so much fun to listen to and definitely worth a few moments of your time.