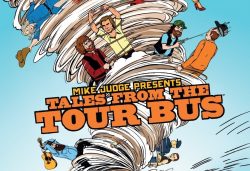 No news on how we get hold of this in the UK yet but how could anyone not want to watch an animated interpretation of the funniest things that ever happened to Waylon Jennings?  There’s a clip below this story if you can’t quite imagine it. Rolling Stone Country reports: “When Mike Judge began work on Tales From the Tour Bus, a new country-music docuseries for Cinemax that premieres on September 22nd, he did so with a mission. “I like converting people who don’t like country into going, ‘OK, maybe this is OK,'” he says. So the Silicon Valley, King of the Hill and Beavis and Butt-head mastermind began collecting the wildest, most hilarious stories about Waylon Jennings, Tammy Wynette, Jerry Lee Lewis and other hellraisers he could from their friends and family and animating them.

“We’re trying to make it less like a history lesson and trying to find the crazy, funny stories that haven’t always been out there,” Judge says. “A lot of country-music documentary stuff that’s been on TNN and CMT has been very polite. But a lot of the stories I’ve heard are more gnarly than Mötley Crüe stories.”

Judge, who grew up in Albuquerque and developed a love of country after spending time on Navajo reservations with his archeologist father, had entertained the idea of making a George Jones biopic years ago but grew cold on the idea and abandoned it. His interest in country storytelling was rekindled after sharing stories he’d heard about Johnny Paycheck, the diminutive Charles Manson lookalike who sang “Take This Job and Shove It,” with his friend Rich Mullins, the bassist for stoner rockers Karma to Burn and a producer on the series. “Rich was saying none of these stories are on the Internet, and maybe it would be a good idea to do a documentary,” Judge says. “I said, ‘Yeah, whatever,’ and he didn’t give up.”

Mullins tracked down the Adams brothers, a trio of musicians who’d backed up both Jones and Paycheck, and conducted hilarious interviews with them, convincing Judge to do the show. “I thought, ‘Maybe we’ll do it the way PBS did with jazz and blues, where we did mini documentaries about country singers,” Judge says, also pointing to the Ginger Baker documentary Beware of Mr. Baker and a cartoon mini-doc about Prince and Questlove as inspirations.
Although only two of his subjects are living (Jerry Lee Lewis and Billy Joe Shaver), Judge found enough bandmates and past associates (including Lewis’s cousin/former underage bride) who were willing to share compelling tales to make the series work. “The Adams brothers helped me find the tone for the show,” he says. “When Gary is talking about Johnny Paycheck shouting, ‘I’ll be out in two weeks,’ as he’s being hauled off to jail for however many years, that was the tone.” Judge laughs. “These guys are just ornery as hell and ballbusters. I find people who are sort of half-genius, half-dumbass to be my favorite people.”

Many of the stories, such as the time Jerry Lee Lewis crashed his car through the gates of Graceland to see Elvis, lend themselves naturally to a cartoon look but Judge’s team animated nearly all of the series, including the interviews. Originally, he’d set out to make a more traditional documentary, but between Cinemax asking for more animation and a series of interviews that were poorly shot by former producers on the show, he decided to illustrate the interviews as well. “We were stuck with it but I liked the way the interviews looked so it worked out,” he says.

Now that the first season is done, he’s considering expanding Tales From the Tour Bus to tackle hip-hop and heavy metal in the future. “I think the next one would be the beginning of gangster rap,” says Judge, a friend of the Geto Boys. “Seeing the N.W.A movie, which was great, I know that there’s a lot of other amazing stories that I’ve heard firsthand that I think are really fascinating. I would love to do that next.”