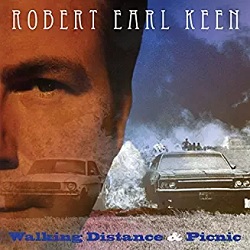 Ever a songwriter of distinction, the reissue of two mid-period Robert Earl Keen albums prove a forceful reminder of exactly why Keen’s formidable reputation as a songwriter precedes him. Having not quite gained the notoriety of Steve Earle or the ‘legend’ label pinned so readily to Townes Van Zandt, Robert Earl Keen is no less deserving of your attention.

Given both albums were originally released by Arista in the late ’90s, it would be reasonable to expect a wealth of songs that teeter on the edge of the mainstream, but any fear of such an assault on good taste are misplaced. Both releases included in this package offer up a collection of rich, earthy material that veer between country rock and understated folk, with Keen exploring territory that finds him often sounding like a less obvious, more natural Tom Petty on songs like Down That Dusty Trail or Roger McGuinn on Billy Grey.  However, unlike either of his fellow travelers, Keen is able to invoke moments of heart-stopping beauty seemingly at the drop of a hat (I’ll Be Here For You) and induce belly laughs elsewhere (That Buckin’ Song).

With the later album, Picnic, presenting a slightly more polished, developed and ambitiously arranged version of the template that clearly sits behind and within both albums, although there is little to divide the albums in terms of quality or merit, they are a distinctly different listening experience – the earlier offering being the more reflective and less direct of the two.  Notwithstanding, it’s a joy to hear Picnic again, noting that the album still remains unavailable from streaming or download platforms (ah, the tangible joy of CDs!)