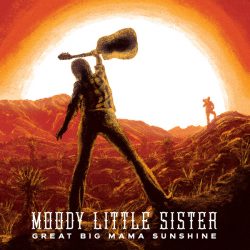 Naomi Sparrow and Rob Stroup have been performing together as Moody Little Sister for some years. The duo’s new album, a follow-up to 2016’s ‘Wild Places’, takes them in a new direction, exchanging piano-driven songs for a guitar-based sound that they describe as “Southwestern Americana Soul”. There’s still a pop sensibility and the album is full of radio and ear-friendly melodies and arrangements.
Moody Little Sister are now based in the wonderfully named New Mexico city of Truth or Consequences and their new desert location is almost like an extra band member or a character populating the stories and sounds of these songs. There’s a real sense of place throughout, which brings cohesion to the album. This is especially evident on the title track, which opens the album. It’s an upbeat, joyous track that serves almost as a love song to their new life in the desert, the wide-open spaces and the constant sunshine. It’s about waking up to glorious sunshine and the warm, bright sound reflects the subject matter well. ‘Great Big Mama Sunshine’ is a statement of intent, setting the tone for the album: it’s warm, open, honest and full of heart. This is followed by ‘711 Lucky Street’, the first single, which has a hint of bluesy guitar and a good groove in the chorus.

Geography remains a theme on a number of other songs, including the mid-paced ‘Big Ole Blue’, through which we move with the narrator from a life by the blue sea to the city and then to the desert, where the wide expanse of blue sky is like returning home. We are defined by the environments we live in.

The characterful vocals and engaging melodies are particularly strong on the driving folky sound of ‘Child of the Wild’ and gentler ballads, such as ‘Nothing but No Good’ and ‘Tumbleweed’, which also showcase Stroup’s excellent backing vocals. His voice complements Sparrow’s well, especially on ‘Bonemaker’. This song, conjuring the spirit of the wild west within its simple structure and lyrical repetition, has a different feel and Stroup’s low vocal layered with Sparrow’s voice is reminiscent of Isobel Campbell and Mark Lanegan. It stands alone and, perhaps, is a hint at the direction the duo will take next. Another highlight is ‘Evelina’, which starts with delicate guitar and a detail that throws the listener right into the narrative: “It was the month of May when our time was up.” Gradually, the song builds with soft percussion and low, whispered backing.

With titles like ‘Losertown’ and ‘Tumbleweed’, the lyrics are straightforward and straight to the point, giving the songs an emotive honesty. That said, clichés tend to be subverted with a twist of good humour: “We’re living in a one-horse town / But we never see that horse around.” Throughout, there is a deliberate and welcome sense of hope and positivity, which we probably all need a little of right now. The polished, commercial sound may not be for every listener. However, what Moody Little Sister do, they do well, with good song-craft and accomplished self-production. This is an album to wake up to: “Because every morning she rises from her bed / Pining for the West to show her colours: gold and red.”