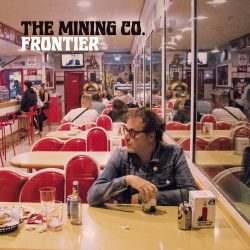 The third album from Michael Gallagher, performing as The Mining Company, is a gently, intelligently romantic record, largely focused on themes of loss and separation. As on previous releases, the quality of the songwriting and musicianship is consistently good, supported by atmospheric, dreamy production and lush arrangements.

The first four songs are particularly effective. The album opens with ‘Mexico Alone’, which begins with the plaintive vocal, placing the emphasis firmly on the lyrics and Gallagher’s understated delivery. By the time layers of busy instrumentation kick in, we are already involved in the story about metaphorical and literal distance in the narrator’s relationship as his lover travels far away. The implied contrast between the characters in the line: “…everywhere to her is home,” is key to the sense of isolation and loss.

This is followed by ‘Lost’, which continues the theme of journeys, characters seeking something undefined, destination uncertain: “All passengers here, some of them unclear where the home is.” In the beginning, the tone created by the brushed percussion and low repetitive notes of the first half-minute is ominous. But then, tinkling higher notes are sprinkled in, drops of contrast, that transform the mood. The quiet, almost-spoken vocal and the slow, tender fade-out fit the song perfectly. ‘Take Your Chances’ is immediately more upbeat, with a warm, layered vocal that showcases Gallagher’s range through its lovely, mellow melody. Again, there are more travel metaphors but, in this case, it’s a more positive image of rowing to a hopeful, distant horizon. Finally, ‘Empty Row’, with its gorgeous arrangement, fast percussion and finger-picking, brings us back to the idea of a couple separated by a plane journey and the dislocation of waiting. It’s a lovely, lyrical story that cleverly traces a journey from hope to wistful nostalgia through the device of the near-repetition of key lines: “…hearing I’m your Romeo…If I can be your Romeo…When I used to be your Romeo.”

The remaining songs on the album offer further examples of engaging lyricism and striking imagery, such as: “The world’s on a ladder going down…Winter heading in // Oh we’re not the summer type // Come a little closer tonight,” on the title track and: “Old photographs hold on // To your beauty that is gone,” in ‘Hold On’. Gallagher’s distinctive singing and vocal range is evident in the arresting melodies of ‘The Promised Line’ and ‘Rollercoaster Kisses’.

The penultimate track, ‘River of Fire’ is another highlight. It feels bigger, thanks to the strong rhythm and bass, the fullness of the instrumentation, the earnest language and delivery and the soothing tune of Gallagher’s voice. After the loss and failure of earlier songs, this feels like more of a redemptive romantic triumph: “She said this love is a beautiful thing // Where I want you to walk blindly in.”

Across the album, there are lots of subtle variations in pace, mood and tone but it all hangs together because of Gallagher’s distinctive voice and the strength of the lyrics and themes. Gallagher crafts exposed, sincere songs that quickly engage the listener. Not all the songs carry the weight of the first half and ‘River of fire’ but the album, as a whole, is a worthwhile, absorbing and atmospheric listen.