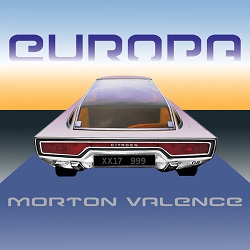 Were it not for the declaration on the album cover that “millions of us…consider ourselves as both citizens of the UK and Europe” Morton Valence’s latest release would represent the subtlest political album you’re ever likely to encounter. At first glance it’s a collection of multi-lingual cover versions, capped off with a reworking of the band’s own Sailors’ Return. Look a little closer and there’s a subliminal message here : je suis venu te dire que je m’en vais takes Serge Gainsbourg’s song and makes of it a lament for the EU Referendum vote, following it up with a crackling Weimer republic version of Wenn ich mir was wunschen durfte that hammers home the message. Robert Jessett and Anne Gilpin’s creations on Europa celebrate what we are losing in voluntarily relinquishing membership of a club that offered a progressive vision of the future – an inclusive Europe which aimed to enshrine the highest social benefits for all its citizens. A club that, uniquely, had required only political combat to join.

It’s no surprise that Europa veers mostly towards the melencholic, offering a soundtrack of bleak reflection on Caruso with Gilpin’s voice shot through with sadness on this pared back production. In a typical Morten Valence flourish this segues straight into A tonga da mironga do kabulete, which does a soft euro-disco shuffle pitched somewhere between lounge jazz and the forced enjoyment of a wedding where everyone – including the happy couple – knows that this union isn’t going to last. The most audacious song on Europa is a splendid reworking of Das Modell which manages to bring something new to the untouchable perfection of the Kraftwerk original. Gone are the synthesisers, in comes stacatto strings which recreate the original melody in a perfect way. Anne Gilpin’s deadpan delivery suits the lyrics in every way possible, and the counter melody delivered by a chirping opera singer works magnificently. It’s the best kind of cover version – it’s the same, but different.`

Europa‘s success is that it takes these dispirit songs and melds them into a cohesive whole. Yes, there’s a message, and the message is porque te vas. Porque indeed. It’s also a reminder of some great songs – Morton Valence’s take on Vem kan segla forutan vind? (you’ll doubtless recall the version by Lee Hazelwood & Nina Lizell) takes on an extra Scandinavian chill with the addition of dulcimer mid-song shifting the plaintive into the realm of the unseen and spectral. It’s another lament for the vote – “Men ej skiljas från vännen min / Utan att fälla tårar” Anne Gilpin movingly sings, and she’s right, you can’t leave a friend without shedding a tear. The reworking of Sailor’s Return is in the same mode – across rolling seas the ships turn back to land, to an insular and introverted outlook. This return is both sorrowful and a muted plea for a bolder future “bring us your heroes, wine and revolution” the duo sing in a fading coda, until they are finally lost in the swell of the sea. Maybe one day the heroes will arise, and we’ll go back out into the world.

Morten Valence offer a set of moving songs as an elegiac protest against anti-European feeling – one could drown in this sea of sadness and regret.