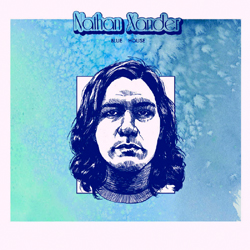 Originally from Pennsylvania, Nathan Xander terms himself a troubadour, widely travelled in the States as he sings his songs. Blue House was recorded in upstate New York with a small band set up – guitar, bass, drums and occasional keyboards – allowing Xander to deliver a mixed bunch of dusty memories and raunchier recollections.

There are several impressive moments on this album where he summons up a downbeat feel with I Remember You Now the best as he sings of meeting old friends and “Eating chilli on Main St. (and) smoking dope on the train.” The song’s delivered with a dreamlike reverie as guitars glisten over a lazy drum shuffle. The opening Mount Washington has a similar feel with soft drum mallets and occasional splashes of guitar colouring an existential moment with snatches of remembered dirty deeds. Closing the album is another memory as Xander sings of revisiting his family home for a party on the affecting Day To Day, a very nice folky shuffle.

In between Xander does unleash a rockier self on the chunky (What It Takes To) Make A Man and the grungy St. Enoch’s Blues. Unknown Road is the most expansive song here with an organ driving this road song along while Pennsylvania is a bristling folk rocker.  But he’s at his best when he keeps it simple on songs such as Peter And Sam, an understated ballad which again looks back to old friendships.

Some memories dusted down with varied results