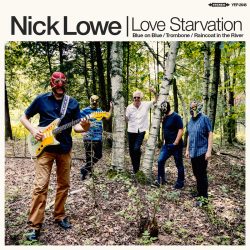 He may be on the wrong side of 70 but Nick Lowe isn’t one for letting the grass grow underneath his feet and his latest EP is a case in point.  It may only be four songs long but his sharp lyrics and consistent ability to wrap the words around a catchy melody seems undiminished over time.  Supported admirably by the quirkily named (and even more quirkily masked and attired) Los Straitjackets, Lowe has penned three original tracks in the shape of  ‘Love Starvation’ ‘Trombone’ and the tender ‘Blue on Blue’ while the fourth song is a highly modernised cover version of the somewhat obscure Ricky Nelson track ‘Raincoat in the River’.

If you didn’t know better you would be forgiven for thinking that ‘Love Starvation’ was a track you may have missed from the late seventies but as Lowe himself says “It has a kind of Ritchie Valens feel to it that I thought might suit Los Straitjackets. It’s funny, that song could’ve been a Rockpile song. But in a way, I don’t think I was good enough to write a song like that back then. It sounds like old stuff, but I’m just better at doing it now.”

Recorded in Woodstock, New York over a short break from touring, this EP is somewhat akin to turning up at a top-class restaurant only to find that they only serve hors d’oeuvres.  The four tracks are lovely and before you know it, they’re gone, and you are left yearning for the main course – which of course isn’t going to arrive in this case.  But you know what, it doesn’t really matter as those tasters were good enough on their own!  Nick Lowe is a bit of national musical treasure and long may his enthusiasm and creativity continue.