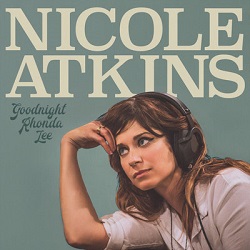 It’s not unreasonable to wonder who Rhonda Lee is, and why the ex-queen of Asbury Park and new resident of Nashville is bidding her farewell. Nicole Atkins provides the answer – it’s herself, or at least her worst half. Having struggled with some sobriety issues in recent years Nicole Atkins took the pledge and this album is a tangible result of her abilities returning as her non-drinking days increased in number. Nicole Atkins has a distinctive voice made for the classic soulful songs that she sings – it’s a rich sound redolent of any number of one name sixties greats, Aretha, Patsy and Dusty come to mind. This is nowhere more apparent than on the album opener – the soon to be a classic A Little Crazy which bears back to back playing with Patsy Cline’s version of Willie Nelson’s Greatest Hit. There are distinctive touches that came from friend and co-writer Chris Isaak but it’s Nicole Atkins’ voice that is the star of the song – quavering with emotion and soaring to dramatic crescendos as Atkins’ nurses her broken heart by “Walking / Spend a lot of time Walking / That’s what people do / Getting over you”, not that it’s working, as she admits “please / if you see me cry / I apologise / I’m a little crazy, crazy, crazy”. If this was on a juke box in the kind of bar where you go to drown your sorrows then it’d have been punched to play endlessly.

It’s a lot for the rest of the album to live up to, but Nicole Atikins gives it her best shot. There are plenty of other superb songs – Brokedown Luck staggers slowly into life, before picking up speed and emerging as a horn rich stab of soul. I Love Living Here (Even When I Don’t) see’s Atkins again perambulating whilst suffering from a broken heart “every time I pass by please don’t feel obliged / We don’t have to say “hi” every single time / Just walk on by” It’s soft and moody and has a bit of a Lee Hazlewood feel to it in the conflicted emotions and repressed anger. In complete musical contrast Sleepwalking skips along like a gushing of positive emotions, but it’s a trick of the light – Nicole Atkins might be wearing a smile but actually she’s just going through the motions, trying to fool everyone but “sleepwalking, around the world I used to dream in”.

A lot of credit for the album’s superb groove has to be given to Atkins’ hot band – Niles City Sound – who cut the album with her live to tape in just five days. Sure, it’s a retro-sound, but it’s a retro-sound that has bouncing guitar lines, snappy percussion, big bass notes and punching horns. Anyone who appreciates what Dap-Tone do will want to hear what Nicole Atkins does.

Nicole Atkins creates the perfect soundtrack for a heartache, and provides a genuine cold stone classic of a song in the form of A Little Crazy.