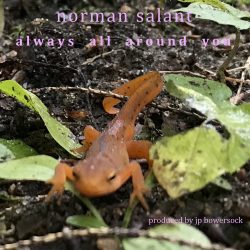 Norman Salant, the saxophonist and composer, has re-invented himself as a singer-songwriter, finding a fresh sense of creative freedom in the lyrical, verbal expressions on ‘Always All Around You’. Here are ten pop-folk songs that are consistently well-crafted and produced with clarity and precision by JP Bowersock, who has worked with The Strokes and Ryan Adams; that production helps to give the album a sense of coherence and identity and the listener experiences the songs best as a whole album, absorbed collectively.

The opening track, ‘At the End of the World’ is one of the strongest songs on the album. It begins with a rhythmic guitar strum before a splash of cymbal introduces the percussion. As the song builds, it is punctuated by tinkling piano and there is a gradual layering of instruments and rich sounds. Salant’s voice is clean and pure with a slight echo to provide depth along with excellent backing vocals. Salant returns to the theme of the end of the world in ‘Point Reyes’, the penultimate track on the album. In this song, the repetition of language and melodic structures, the beautiful, abstract imagery and uplifting backing vocals give ‘Point Reyes’ an absorbing ‘hymn-like’ quality.

Following the first song, ‘The World’s Greatest Lover’ has a good groove and the backing vocals offer depth, almost serving as an additional instrument. The song plays out with a back and forth conversation between the backing vocals and the saxophone. ‘Feels Like Rain’ is all about the percussion and the rhythm. The lyrics are full of details and smart phrasing to pull you in to the life of the song’s main character: “No one needs to tell her she’s looking like a broken heart.”

The album offers other songs that are grounded by narrative details and characters’ names, as in the gently melodic ‘Grace’ and ‘The Civil War’, one of the album’s highlights that builds and grows with twangs of electric guitar and sax as Salant sings: “This time things are getting rough / Having nothing left to lose is not enough.” Other songs are more abstract, including the album closer, ‘Carried Away’, with layered vocals and some striking imagery: “Sorrow like a black sheet / Is spread across the moon…At dawn he’s still walking / His breath like icy swells / Cold mist wraps around his fists / His wide eyes seeing oceans.” It’s a fitting end.

In the right way, ‘Always All Around You’ is an easy, enjoyable listen full of well-written, intelligent pieces that showcase Salant’s evident ability to craft and construct songs and structure them into a cohesive LP. Sometimes, the emotion might come through more strongly with a rawer approach to the production, which is very pure and flawless. That said, the melodies are catchy and the songs are largely effective. During the last few years, Salant has been prolific, writing a large number of songs that have been released on EPs and ‘Yodeling Goodbye’, an album released in spring 2018. Of these recent releases, ‘Always All Around You’ is the strongest yet and there is, no doubt, more to come.