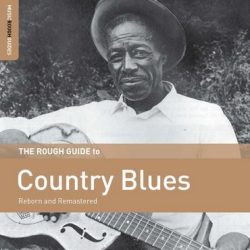 This is an album that does exactly what it says on the tin. The exquisite notes that accompany this comprehensive study of country blues do much to set its place within the history of popular music of the 20th Century.  This is not an album for the dilettante. It is a measured exploration of a number of artists that not only defined a loosely coined collective term but some had a reach far beyond their wildest dreams when they set out as entertainers.

These are mainly acoustic guitar-driven blues songs in the main and the quality of the recordings both reflect their age and authenticity. Starting with Skip James’s ‘Hard Time Killin’ Floor Blues’ and finishing with Leadbelly and his ‘Packing Trunk Blues’ the 25 songs date from between 1927 – 1935 a between wars time that saw the depression rip through the heart of American culture.

This album is in many ways alien given the modern listening experience and production mores; but it is an experience worth persistence. One is tempted to think that acts such as The Jamestown Revival and The Avett Brothers mine a similar seam but their work is but a reflection of an influence that runs deep through modern American music and this album takes you to the very source with its cast of troubadours and wastrels.  Worth more than a casual listen.