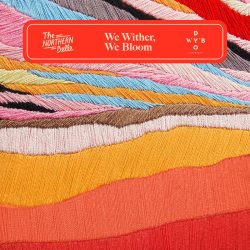 “We Wither, We Bloom” is the third album from Norwegian septet The Northern Belle. Yes, you read that correctly. A Norwegian seven-piece. In addition, the record features a string quartet and the Norwegian Hardanger fiddle. At this point you will be punching the air, saying “Yess! Bring it on! Norwegians! Strings! Hardanger fiddles!” and plumping the cushions on your favourite armchair in preparation for a musical treat.  However, before you put the kettle on, you should be aware that Norwegiana sounds very much like… well, Americana.

The band reference Fleetwood Mac when describing their sound, and there is a lot of those Stevie Nicks led tunes in their music, with pillowy choruses featuring multi-layered harmonies.  Most of the material follows a template that would sit well in a soft rock station, which no doubt is the point, although it takes the edge of those songs that aim for something darker. The band is fronted by Stine Andreassen and in ‘Remember It’ she sings “I want to hurt you and remember it”.  However this is encased in a bouncy melody that doesn’t communicate vindictiveness or anguish.  In `Late Bloomer’ she sings  “Screw the others / …They say girls can’t play guitar / But I don’t give a fuck” but the music doesn’t transmit rage.

When the material moves away from those easy sounds and steady beats there is something here.  `I Was Born to be a Mother’ has a shimmering drone that runs throughout. Andreassen’s singing has an ache in the chorus and the simple melody is appropriately reminiscent of a lullaby.  The strings pick up the tune, reinforce it and play variations that complement the piece.

`Lonely’ expresses isolation and self-reproach with an insistent drumbeat.  The lyrics are suitably blunt; “I’m lonely / I can’t even do loneliness right”.  The album finishes with the title track; the most pared-back song on the record.  With just guitar and voice, it expresses the ebb and flow of life with an organic metaphor.

Every genre needs to be refreshed from the input of other cultures, and this could be the impact and USP of Northern Belle.  It’s clear the band have a love of the Americana genre, as seen in the song ‘Nudie Suit’, which references the sartorial splendour of Gram Parsons.  However, at the moment their musical voice has the same transatlantic drawl as their heroes.