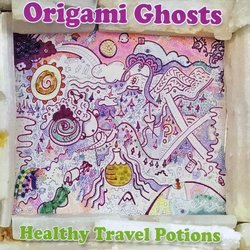 If you put “wacky” into a thesaurus you get words and phrases like madcap, weird, zany, way-out, off the wall and mad, amongst others. Origami Ghost’s new album ‘Healthy Travel Options’ is all of those adjectives and more. Many of the songs are straight out of left field with tongue in cheek lyrics such as “My suitcase has a broken wheel – boing, boing” from ‘Lost & Proud’, “I wanna know what the other person is saying” from ‘It’s Not A Séance’, “If you’re not feeling well, take a grumpiness pill” from ‘Grumpiness Pill’ and “Blobby, blobby, blobby” from (of course) ‘Blobby’! Some of the lyrics may have been even wackier than those but unfortunately the vocals are often so low in the mix, that it’s difficult to hear exactly what’s being sung. There are also other unusual song titles such as ‘Brisket’, ‘Doing the Dishes’ and the play on words of ‘Keeper Sutherland’ – this is not your typical, run of the mill Americana album.

On top of those off-beat titles, the band, too,  have unusual names such as Benny “The Bus Driver” King Kendall on drums, Dr Jacoby on cello and David “Fern” Clement on bass. Even the two main band members, John Paul de Bellevue on guitar and singin’ (sic) and Cassie Crouton on keyboards, flute and melodica don’t exactly have “normal” names.

The music itself veers from Ramones-like punk to mainstream ’60s pop to gentle acoustic folk, although the band describe themselves as “anti folk”. There’s also a Mothers of Invention feel to a couple of tracks – Frank Zappa would feel right at home in the world of Origami Ghosts’ music.

‘Healthy Travel Potions’ is Origami Ghosts’ fifth album and the band describe it as “New escapades of tangly folk and pop, squeeze of punk”. There are fifteen tracks, most of them lasting around three minutes or so, although ‘Candida’ comes in at just 1 minute 35. The instrumentation is interesting with some delightful cello and flute adding texture to a few of the tracks, although what sounds like someone playing the spoons on ‘Kundalini’ sound slightly incongruous – even for this album.

All in all, the oddly titled ‘Healthy Travel Potions’ (it has an odd cover too) might not be to everyone’s taste but it takes all sorts to make the Americana world go round.

An off-beat offering from a left-field band