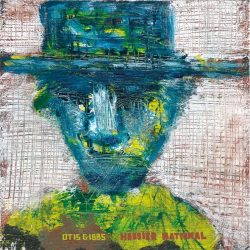 In the eighteen years that have passed since the 2002 issue of his debut album, ‘49th and Melancholy’ Otis Gibbs has released a succession of albums showcasing his witty, observational, political and storytelling songs that along with his superbly engaging live shows, have established him as a highly respected stalwart of the folk/americana genre. Paradoxically, it has perhaps been Gibbs’ adherence to the acoustic troubadour approach that has also limited his appeal and prevented his songs from being brought to a wider public. The release of ‘Hoosier National’ sees Gibbs move out of that particular niche by recording his first-ever, all-electric album which is arguably more accessible, whilst losing none of the craft or artistry of his distinctive songwriting. Indeed, the ease with which Gibbs transmutes from acoustic folkie to, melodic, soulful, blue-collar rocker only raises the question as to why he hasn’t dipped his toes into that particular pond somewhat sooner.

‘Hoosier National’ was recorded at Gibbs’ friend Thomm Jutz’s house. Jutz, who has previously worked with Nanci Griffith and Mary Gauthier supplies guitar. Gibbs is also backed by an impressive line-up of Mark Fain (Ry Cooder, John Fogerty, Tom Petty) on bass, Jen Gunderman (Sheryl Crow, Jayhawks) on organ and piano, with Lynn Williams of the Muscle Shoals rhythm section on drums. Any fears that this fuller sound might smother some of the subtleties of the songs are quickly dispelled. Instead, the simple, tight arrangements serve to lift Gibbs’ songs and force him to show much greater vocal dexterity than on his previous recordings. The trademark husky growl is still there but with some less familiar variations in tone, volume and range. The danger here is that he might try too hard and that it all might get a bit contrived – but not a bit of it – his delivery sounds unstrained and natural, like he’s been singing that way for years.

The album’s opener ‘Nine Foot Problem’ sees gently strummed electric guitar and swirling organ accompany a song about industrial and social decay in small-town America. In many ways, this is typical Gibbs territory, only here the musical and vocal delivery combine to give a mournful and reflective feeling to Gibbs’ words, furnishing the song with greater power than straightforward polemic. Next up comes ‘Panhead’ one of those Otis Gibbs’ epic yarns; this one being about how his father built a Harley motorcycle from old used parts only it have it stolen by bikers from whom he went and retrieved it. Gibbs’ familiar conversational style is overlaid on to a chugging folk-blues which explodes into a rocking chorus as Gibbs extends his vocals to go with it. Another absorbing story later unfolds with ‘Bill Traylor’, this time the tale of an African-American born into slavery who becomes a celebrated painter in later life.

As the album continues to unfold ‘Sons & Daughters’ is almost Springsteen-like, while ‘Lord Open Road’ is a largely spoken tale that slow burns into a bit of a rocker before slowly fading back again. On ‘Fountain Square Stare’ and ‘Blood’ Gibbs probably strays furthest from his established template as he assuredly moves into heartland rock territory with punchy hooks, catchy lines and sing-along choruses. The smouldering soulful blues of ‘Mid Century Modern’ takes Gibbs into J.J. Cale territory, whilst ‘Ten Minutes’ is a catchy country rocker and the album’s closing song ‘Faithful Friend’ takes us back to Springsteen territory with a lament for the “darkness of our times”. Gibbs’ unfamiliar sounds, whilst being the most immediately noticeable aspect of the album, should not overshadow the fact that ‘Hoosier National’ is also a tremendous collection of songs, each one crafted with the smith-like attention Otis Gibbs followers are accustomed to.

‘Hoosier National’ represents not just a change of tack, but also a considerable leap forward for Otis Gibbs. He has taken his long-established songwriting skills and has created a new vehicle for them. The result is unmistakably Otis Gibbs, but with a renewed freshness and vitality. It is the sound of an artist striving to still be heard. In his own words: “We’re in the middle of a pandemic and I’m feeling it like everybody else….I think it’s safe to say, this is the absolute worst possible time to release a record. Most people would give up at this point, but I’m not most people”. Pandemic or not, any time is a good time to release a record as good as this one, quite possibly his best yet.

About Clint West 137 Articles
From buying my first record aged 10 and attending my first gig at 14, music has been a lifelong obsession. A proud native of Suffolk, I have lived in and around Manchester for the best part of 30 years. My idea of a perfect day would be a new record arriving in the post in the morning, watching Ipswich Town win in the afternoon followed by a gig and a pint with my mates at night,