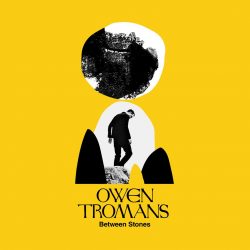 ‘Between Stones’, the latest album from Owen Tromans, based in Hampshire, has one foot firmly in the folk/progressive rock genre, but also has echoes of Neil Young that take it closer to the home territory of Americana. The latter is best heard in the prevailing sense of foreboding in ‘Mark Pales Ghost’ and the moving ballad ‘Burying the Moon King’, but Tromans’ vocal style has a strong hint of Young’s delivery on many of the album’s tracks.

At the other end of the scale, the opening track, ‘Danebury Rumination’ and its later reprise is reminiscent of ‘Bryter Layter’ era Nick Drake, while ‘Happiness’ carries hints of Syd Barrett’s later solo work.

The album features a variety of instrumental arrangements, from ballads with prominent strings to the riff-driven Britpop character of ‘Vague Success’, but with a dominant theme of acoustic guitar, heard to best effect on ‘Between Stones’, and the up-tempo ‘A Dialogue’.

Lyrically, the album takes us firmly into the folk/progressive rock genre, exploring both traditional folk themes, and ancient myths, inspired by the ancient history of Britain’s landscapes.

In true prog-rock fashion, the album includes the epic ‘Grimcross’ running to over 9 minutes, this time reflecting not just the vocal style but also guitar playing of Neil Young, to great effect, while the narrative draws in the listener to the unfolding story.

In sum: an eclectic album, its variety a strength rather than a weakness, and with much to draw the listener back.