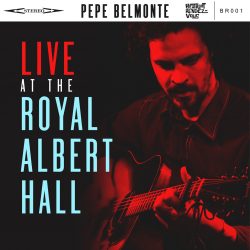 This live album was recorded way back in 2011. The songs are all from his debut album ‘The Hermit’s Waltz’ which was released that year and never had a follow up tour as a result of a serious accident that left Pepe in a coma. This recording captures a moment in his journey back from that experience and a certain fragility of sound is evident which contrasts with the more confident style evident on the original studio versions. This delicacy contributes significantly to the overall feel of the album.

Pepe is without doubt a talented singer/songwriter in a classic laid back folk blues style. Overall this is a warm and familiar recording combining soft vocals effectively with finger picking guitar and excellent cello accompaniment by Jo Silverston.

The opening song of the concert, ‘Lonely Lady’ indicates a certain nervousness and begins tentatively, then continues to build throughout in both pace and confidence, setting the scene for the remainder of the recording. ‘Nothing Blue Except The Sky’ could have been lifted straight from the classic Dylan songbook with mandatory accompanying harmonica and immediately feels like one of those songs you already know. ‘Pending On My Mind’ is a personal tale of reflection on love while riding through the countryside at night which contains some of his finer songwriting lines.

It is only when you get to ‘The Hermit’s Waltz’ that you can recognise he hails from County Cork and cut his teeth on the Irish folk scene. This aspect of his songwriting is revealed in both composition and vocal style in the closing song on this all too short mini-album.

Pepe is on tour again with a new release due this month. Assuming his songwriting has continued to develop during the period since this live recording, his next release is without doubt something to look forward to.