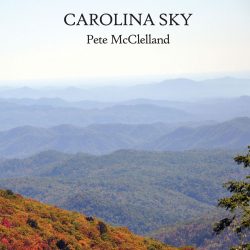 Pete McClelland is a busy man. He is a member of two folk bands, The Blackthorn Band and ThingumaJig as well as being a founder member of country outfit Montana Rain. Along with wife Mannie he has spent much of the last 40 years criss-crossing North America and, if journeys of that magnitude were bound to open his ears to a vast range of musical influences, then it is firmly in country, and Nashville in particular, that McClelland has pitched his flag on this debut solo release.

McClelland set out for Nashville from his Sussex home hoping to find someone to cover his songs. He ended up with the surely unique result of an album started at Beach Studios in Shoreham by Sea and completed with Pat Holt on Music Row, Nashville. Perhaps it is not surprising then to find a musical mix that finds lyrics firmly embedded in the folk camp and, with a number of experienced Nashville musicians on board, a country feel to the musical accompaniment.

The songs were written between 2008 and 2016 and are a collection of McClelland’s thoughts and memories of those mammoth road trips. From the opening track The Appalachian Way it becomes clear that these are indeed, quite literally at times, stories put to music. There is a lovely fiddle running through the heart of this track and so that mix of folk meets country is firmly entrenched from the start.

This is a mix that could have worked well but too many of the lyrics come across as simplistic. Lovers of a good rhyming couplet will be in their element here but after only a couple of tracks you may find yourself second-guessing the next line rather than appreciating some excellent musicianship. This is a pity as these are highly qualified Nashville support players who have worked with the cream of country; the likes of Merle Haggard, Vince Gill, Charlie Rich and Rosanne Cash.

McClelland’s voice feels flat and laboured at times and, regrettably, taken together with the lyrical limitations on offer, this does not make for a winning combination.