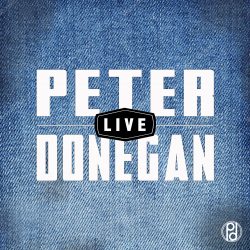 Why do artists produce live albums? Usually, it’s to provide a flavour of their live performances and give a feel of being part of a unique event. Often, it’s to give a sense of their genuine musicianship and character that isn’t always evident on a studio recording. Sometimes, it’s to celebrate something special. In the case of Peter Donegan’s new ‘Live’ album, it’s all three.

This recording, a follow-up to 2017’s ‘Superman’ EP, offers the true warmth of a live performance, complete with good-natured chatter and banter between songs, giving the feel of an intimate gig. It also showcases the technical skill and togetherness of the full Donegan band, such as the driving electric guitar solos in ‘I’m Yours’ and ‘Walking Man’ and the fast, dramatic playing in the skiffle songs at the mid-point of the show. In terms of celebration, this album is almost unparalleled in its significance because it was recorded live in the very Decca recording studio in which Peter’s father, the great Lonnie Donegan, put down the classic ‘Rock Island Line’ 65 years ago. Lonnie led the skiffle revival in the 1950s that changed the course of the British music industry and inspired countless subsequent artists, including The Beatles. Peter actually played keys in his father’s band and this tribute to Lonnie’s impact is fitting.

After a jam session, which introduces us to the prowess of all the performers on stage, Donegan launches into a straight-up country rocker, ‘Soldier’. This song reflects the rest of the performance in the precision of Donegan and his band, the tightness of the sound and the clarity and strength of the production. Throughout the show, Donegan performs many of his own compositions, including the likes of ‘Superman’ with its radio-friendly melody and effective harmonies and the emotive ‘Little Man’, which is a gentle, disarming, open song written for his son. Perhaps, the stand-out song is the tender ‘Just a Flower’, in which Donegan narrates a story of social and racial injustice that has never been more relevant. The song-craft is excellent and the lyrics, melody and gently earnest vocal draw the listener in effectively.

The show is also notable for the inclusion of an excellent skiffle section in the middle, starting with a lively version of ‘Worried Man Blues’. There’s a short medley of Lonnie’s songs, including ‘Cumberland Gap’ and ‘Don’t You Rock Me Daddy-O’ and, of course, an incredibly fast and joyous rendition of ‘Rock Island Line’. All these songs are made new for a modern audience and delivered with warm-hearted sincerity and great skill. There’s a new version of the classic ‘I’ll Never Fall in Love Again’, which Lonnie Donegan wrote for Tom Jones and was also recorded by Elvis. It’s a powerful performance that builds to a suitable climax. The show and album are rounded off nicely with an enthusiastic ‘Midnight Special’.

Throughout, Peter Donegan sings with excellent clarity and a pure voice; it’s a show full of earnest passion and accomplished, technical performances. This is a live album that succeeds in transmitting to the listener something of the magic of a special evening. The purpose of the recording is clearly very meaningful to Donegan and any listener who is interested in music history.