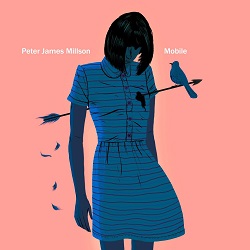 Produced by the acclaimed songwriter, Boo Hewerdine, this record is the third by photographer Millson (who has worked for no less than the NME and the Guardian). Clearly an unassuming chap, he plays down his music-making credentials with offhand comments on his website which point to his agenda being far more ‘cottage industry’ than ‘world domination’. Notwithstanding, Millson keeps good company – Hewerdine, Martha Tilson, Adrian McNally (of The Unthanks). His evident tendency toward humility, however, rather belies his deft knack for a melody as is capably demonstrated throughout “Mobile”.

Conceptually speaking, it would seem that the lack of pomposity almost certainly carries through to his music… the word ‘understatement’ doesn’t really do justice to the ten songs presented here. It’s not exactly ‘lo-fi’ but it’s not too far away! In fact (although it’s not obvious from the sound quality) the whole album was recorded live to a smartphone, which one would suppose is, in many ways, the modern day equivalent of Daniel Johnston’s adventures in home taping (if rather less peculiar) – suffice to say, “Mobile” is a triumph in simplicity.

Performed solo, accompanying himself on guitar and piano (not at the same time – that would be impressive), the songs are undeniably well crafted and adeptly performed, if a touch uniformly inoffensive. That isn’t to say that there is any expectation that songs should shout rather than speak, but often Millson’s approach to putting a song together feels  arguably a little too relaxed. That said, there is very much to like about pretty much everything here (even down to the striking album art) with notable highlights including We’ve Got It All, True Believer, and the truly stunning closing track, A Little Light.

Further evidence that quiet is the new loud.