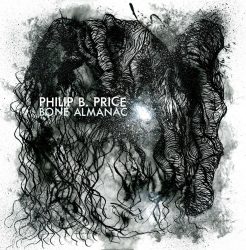 A winter release seems particularly appropriate for this solo album from Winterpills frontman Philip B. Price. ‘Bone Almanac’ is a chilling and haunting work that’s frequently bleak, given that much of it addresses very current concerns, such as our climate crisis; a fitting soundtrack for the winter. But there’s also much to celebrate as this is a fine album indeed and a real solo effort, given that Price has written all the songs and plays every instrument used on the album, his only collaborator being engineer and producer Justin Pizzoferrato.

While I’d heard of Winterpills, I’ve never really been aware of their music before now. Having listened to some of their songs it’s hard to gauge how their fans will react to this solo offering of Price’s. Winterpills’ sound is based on harmonious Indie Rock, with comparisons to the likes of The Byrds and early Simon & Garfunkel. This solo album is altogether darker fare, closer in sound and mood to the likes of Nick Drake or, musically at least, mid-period John Martyn.

The album gets underway with one of the more positive tracks on the album, ‘Holding Onto Light’ which at least offers some words of vague hope, “Now your eyes have seen a deeper shade of night. Some blues are left alone and some are taught to fight. Nothing seems too real and nothing makes you laugh, so you’re holding on to light”. Elsewhere things are not quite so upbeat. ‘C’mon World’, one of the standout tracks of the album and its first single release, comes across as the sort of track Jimmy Buffet might write if he wrote dystopian visions of the future – the wry humour is present but the message is ultimately that we need to get our act together if we want any sort of future at all: “If I have to lose another future, I think I’m gonna stop in the now. And I’ll be staring at the Blood Red sunset, with my vodka and my favourite tourniquet…”. Cheery stuff!

The interesting thing is that, amidst all the doom and gloom, this is not a depressing set of songs but a really enjoyable album; Price has put together a first-class selection of songs and delivers them with panache. The musicality of this album is particularly impressive, not least because he is singularly responsible for all of it. His guitar playing is excellent throughout, but so is his use of other instruments and his harmonising vocal work. For those who really care about these things there are some nice touches on the sleeve notes, where he has given some indication of instruments and tuning used, so, for instance, we find that the aforementioned ‘C’mon World’ was performed on a Martin 000-18 in standard tuning and accompanied by piano, whereas ‘Althaearosea (Holly’s song)’ was played on a Martin 00-17, C-tuned Drop D. For those of us who like to know such arcane facts it’s a thoughtful inclusion.

There really isn’t a bad song here but other standout tracks include the almost olde-worlde quality of ‘Crow Mocks My Wings’ and the truly ethereal feel of the title track ‘Bone Almanac’.

All in all an excellent album to end the year on, with just one question nagging at the back of the mind – “Is this really Americana?”! Well, maybe… at the real extremes of any definition we might give. What is beyond doubt is that it’s a fine album and one that Philip B. Price can be justifiably proud of; best to enjoy it for that and forget about categorisations.