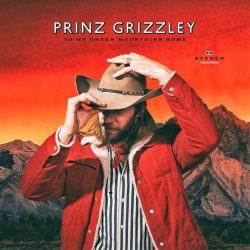 Egg, Austria isn’t someplace that you would expect to be the launchpad for an album that sounds like it was born somewhere exactly halfway between Memphis and Nashville. But geography isn’t the only reason that listeners will find themselves doing a double-take when they listen to the sophomore release from Prinz Grizzley. The album’s twelve tracks are a carousel of musical influences that are polished up with production that will have listeners wondering which decade they’re in (in a good way).

Many have been quick to draw comparisons between Chris Comper’s (the man behind the Prinz Grizzley moniker) voice and Chris Stapleton or Jamie Johnson. That’s the sort of connection that any artist would want fans to make and Comper definitely has the voice and the writing chops to stand side by side with those singers. But the influences that are apparent on this album are broader and reach back farther than the folks who are doing it right now.

If you drop the needle on this album and listen to it straight through, you’ll hear the reasons for the Stapleton comparisons as soon as the first track ‘You Don’t Know Love’ gets rolling. Tracks like ‘Cutting Wood’ and ‘Shovel’, which has a very Tom Waits feel, stray just far enough from the straight and narrow to keep listeners on their toes. ‘Drifting’ would be perfectly at home alongside any of the tracks from Nathaniel Rateliff’s solo release earlier this year. There are some tracks, like ‘Magdelena’ that bring Bob Frank and John Murry to mind.

The most consistent thread running through the album is the inescapable feeling that you’re listening to brand new material released by the writer and performer that John Hiatt was in the late 80s and early 90s. If you wanted to find a nicer thing to say about an album than “hey that guy sounds like Chris Stapleton,”—well, that would be a solid option.

A solid songwriter with a voice of many colours