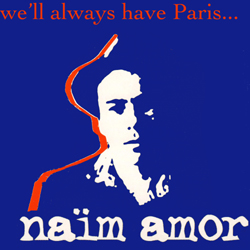 There’s a rare opportunity to catch Parisian by way of Tucson musician Naim Amor on his first appearance on UK soil in over nine years when he plays a solo show this Friday. Amor started out in the Parisian underground scene before relocating to Tucson in the late 1990s as one half of the Amor Belhom duo releasing an album ABBC recorded in collaboration with Calexico.

With his unique fusion of classic film scores, spaghetti western jangle and cool continental pop Amor has released several albums which have featured almost all of the Tucson rock fraternity including Howe Gelb and Marianne Dissard. Alongside his song-based records he has released four instrumental albums collectively called Soundtracks while several of his songs have featured in films including Shane Meadows’ Dead Man’s Shoes. His latest release, The Western Suite and Siesta Songs found him teamed up again with Calexico drummer John Convertino.

His one UK show is this Friday, 12th May at The King And Queen Public House, Fitzrovia, London, W1 with support from Keith John Adams. Details here