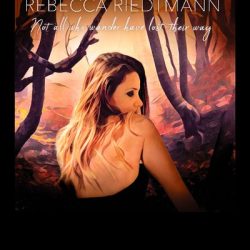 Veteran readers (and I mean that in the ‘I got to see all the best bands’ sense) will remember a time when music was wrestled back into the gift of everyone – ‘here is a guitar chord, here is another and here is a third – now go form a band’ we were told.  Was it simpler then? The major hurdle was getting your music in front of an audience, social media would surely have made punk a different beast.  Now anybody and everybody is a couple of clicks away from sharing anything. The difficulty is how to be heard when the internet is jam-packed with shoals of would-bes. But in among the masses is serious talent, and Rebecca Riedtmann is in that category for sure. So let’s have a shout out for Rebecca and promise ourselves that we will check out her debut album ‘Not All Who Wonder Have Lost Their Way’.

Rebecca’s own bio beckons us in with the promise that in her song-writing she takes influences of  ‘…melodic pop-rock, infuses it with rootsy influences and emerges with something uniquely her own’. Fleetwood Mac, especially Stevie Nicks is cited as a favourite but this belies how those influences manifest on this release. There is little here that would make the listener think ‘Ah, Nicks’, but plenty to induce the thought that ’That is a fine tune’. So what is the uniqueness? In truth there are plenty of the usual tropes – The album title is a lyric from the country steeped song ‘Georgia’ and there is plenty about travelling in hope (‘Take to the Road’). Broken hearts get a look in of course (“You and your bad loving ain’t welcome around here no more” ) and loss (‘Letting Go’). The album is whistle-stop tour of Americana geography – Georgia, Kentucky, Tennessee – they are all there. So maybe it’s odd to know that Rebecca is a home-based-Surrey- one-of our-own.  She has absorbed the Americana influence but produced some lovely arrangements that just nudge us away from any temptation to think we have heard it all before. Right from the start ‘Better Me’, featuring the harp playing of Tom Moth (Florence and the Machine) shows that Riedtman has an ear, guitar and pen for a strong tune.

The crowning of the record though, and what brings everything together is Rebecca’s voice. It’s rich, strong, clear and resonant. It’s not Nicks; It’s like a more full-toned Sixpence None the Richer and a slightly less Celtic Lick the Tins. It is, above all, deeply satisfying. Having such a strong vocal presence drives cool finger clicking tunes like ‘Better Me’ and ‘Eyes on Me’, it lifts the piano-driven slower tempo ‘Words’, caresses around the sultry ‘Southern Dream’ and lets loose on the impassioned ‘Closer’. Riedtmann has delivered a fine album which, we have to remind ourselves is a debut. On this form the next one is going to be very very special. This kind of talent needs to be heard – go listen.