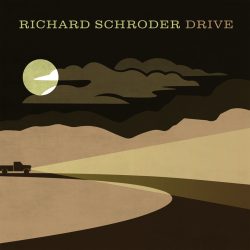 Richard Schroder certainly looks like he’s put in the spade work with his debut album, seeking out advice from songwriting coach, Steve Seskin, who says that what separates the debutant from his peers is his willingness to undertake endless re-writes of songs in order to hone them to perfection. Aside from the two years it’s taken him to make the album, Schroder also surrounded himself with some of the best musicians in the business, including Duke Levine (who’s worked with Roseanne Cash and Mary Chapin Carpenter), as well as getting the record mastered by a Grammy award winner who’s assisted Carrie Underwood.

Although very simple in structure, the songs are all well crafted, and many prove to be as catchy as the opening number, ‘Drivin’, about a musician at the end of a tour pining to get back to the woman he loves.

In truth, much of the subject matter of ‘Drive’ is hackneyed – largely about the getting and losing of love, on songs such as ‘Stay,’ ‘Nashville Girl,’ and ‘Backseat Love.’ Elsewhere, the material can also prove overly corny, particularly on the song, ‘Someone Else’ – an attempt at a tear jerking ballad about a misty-eyed lover boy missing out to a competing Romeo – which easily crosses the line into schmaltzy territory.

Along with the song, ‘Drivin’, the stand out track on the album is probably ‘Wildest Dreams,’ a tight rocker with a soaring melody and an extended guitar work out about realising your ambitions – “If you’ve got everything you’ve ever wanted/ But there’s still a hunger in your gut / Hey, maybe your wildest dreams just ain’t wild enough.”

For those of an alt-country disposition the result is likely to prove a bit too polished – sounding not unlike a cross between Tim McGraw and Garth Brooks. However, none of the songs outstay their welcome, the longest clocking in at just over four minutes – and they all prove easy to listen to, achieving what Richard Schroder says is his ambition, that “I strive to write songs that you can listen to in your car with the windows down.”