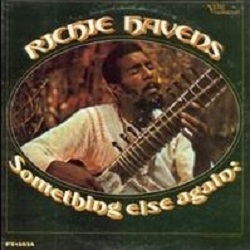 ‘Something Else Again‘ was originally released in 1968 and is one of a clutch of late 1960’s / early 1970’s albums that represent the first Golden period of Richie Havens’ music – his last 3 or 4 albums released in the early part of the 21st century were another run of consistently superb recordings. ‘Something Else Again‘ though forms part of Havens’ early ever changing musical approaches which encompassed folk, blues, jazz, audio experiments and more – and usually all of these included to a greater or lesser extent on the same album. Richie Havens has a reputation as a great interpreter of other people’s songs – and his take on Dylan’s ‘Maggie’s Farm‘ is superb – but he was also a fine songwriter in his own right. A good rule of thumb is that the greater the number of Havens originals on an album the better the album (the masterpiece ‘Mixed Bag‘ being the exception to the rule). ‘Something Else Again‘ would spawn a well known cover of its own when, surprisingly, Yes covered ‘No opportunity necessary, No experience needed‘.

Throughout the album there is plenty of Havens’ legendary driving acoustic guitar, frantically pushing forward the music, as Havens pleads for understanding, lays his cards out to reveal his heart, emboldens and challenges the listener to take a stand and live a better life. ‘Run Shaker Life‘ sounds as impassioned today as the day it was laid down, and was to become one of Havens’ signature songs. ‘The Klan‘ is a number that should be an historical period piece but, beyond sadly, is still relevant fifty years later : “He who rides with the Klan / He is a devil and not a man / For underneath that white disguise / I have looked into his eyes / Brother, stand with me / it’s not easy to be free“. Alan Arkin wrote that one. The title track is a seven and a half minute epic, inspired by the direction George Harrison was taking with The Beatles, that has Havens playing an extended sitar instrumental which acknowledges the debt by referencing ‘Within you, without you‘ as it closes out. It could be looked on as an interesting relic of its time, or as a valid piece of westernised raga-rock – it’s definitely groovy whichever side one falls on.

Released only a short time before Richie Havens famously opened Woodstock when no-one was ready – or brave enough – to, ‘Something Else Again‘ initially had only moderate success. That wasn’t due to any lack in the album or the artist – this is a superb collection by a major artist at the heights of his powers. Let’s hope that Floating World will continue to fill in the missing albums from Richie Havens – it’s great to hear him again.

Richie Havens at his late sixties peak – a timely re-release of a superb album.