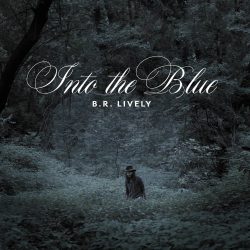 This debut album from B.R. Lively is deep-rooted in folk, but has a unique style all its own, with a lot of outside inspirations, which show in its use of Motown beats and string arrangements. Lively is a great storyteller and using folk music to tell these stories works in his favour.  ‘Into The Blue’ is a great album made for easy listening with songs about heartbreak and the world at large.

Opening track ‘The Blue’ gets the album off to a great start with a slow intro of just Lively and his guitar. Towards the middle of the song, he introduces a backing vocalist, with accompanying drums and strings, which makes it feel complete.  It also encourages the listener to engage further with the rest of the album.

‘Summertime Sky’ is one of the best songs on the album, with a clear honky-tonk influence in its use of brass and piano accompaniment – and as the name suggests, it’s a perfect song to celebrate summer. There is just a rush of freedom within the lyrics, with the likes of “if there’s thunder and lightning don’t be scared / I will be by your side, we’ll just wait for the rain to wash away what we left behind.”  His smooth vocals are not competing with the music; they all just blend together. The whole album’s production is of such high quality and really shows the talent that producer Gordy Quist, frontman of Band of Heathens, brings to proceedings.

The album was written while Lively was on the road after a messy breakup and the songs focus on lost love and the freedom he’s found. With his echoing voice and poetic lyrics, it’s hard to find fault with the largely acoustic songs on the record. It’s got everything you need in a high-class indie folk album.

Debut album about finding peace and self-discovery, with high-quality production values. A must listen.