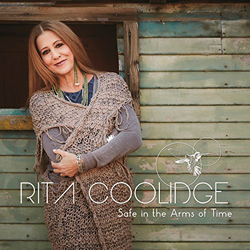 The fabled Delta Lady, Rita Coolidge, is currently on a rare four day residency at Canary Wharf’s Boisdale in London promoting her latest album,  ‘Safe in the arms of Time’. The Grammy winning singer-songwriter is best remembered for her string of solo albums back in the seventies along with discs recorded with her then husband, Kris Kristofferson, while prior to this she sang with a veritable host of superstars including Leon Russell, Joe Cocker, Bob Dylan, Eric Clapton, Dave Mason, Graham Nash, and Stephen Stills. Russell wrote his hit song Delta Lady inspired by Coolidge and she featured alongside Russell and Joe Cocker in the film Mad Dogs and Englishmen.

‘Safe in the Arms of Time’ was recorded in L.A.’s Sunset Sound, the studio where she recorded her albums for A&M back in the seventies and finds her covering songs by Graham Nash, Chris Stapleton, Stan Lynch, and Keb’ Mo’. She still has two shows to go in her four day residency so if you’re quick you can catch her tonight or tomorrow, ticket information here