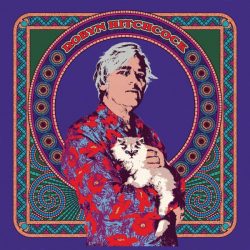 Robyn Hitchcock releases his twenty first studio album, his first since 2014’s ‘The Man Upstairs’, and has chosen after all these years an eponymous title. “It’s ‘Introducing Robyn Hitchcock” he has said, working on the principle that the album will serve as a good entry point for those new to his music. Like it and you’ll find plenty similar throughout his career and if you don’t, well there’s no point in investigating any further. It’s not difficult to envisage many who will be prepared to seek out further work by this surrealist music icon after listening to this as it is a triumphant return. Hitchcock relocated to Nashville in 2014 and the seeds of this album were sown when he was tempted into the studio by producer Brendan Benson who urged him to make a record like the Soft Boys and Hitchcock has responded by delivering a piece of work that ranks alongside anything he has done.

From the driving, psych-tinged opener of I Want To Tell You About What I Want to the sublime and hypnotic ending of Time Coast, this album bristles with creativity and glorious pop-soaked moments of magic among the typical Hitchcock dreamscape that is created. A strong team of Nashville’s finest feature as Hitchcock’s backing band including Annie McCue on guitar, Russ Pahl on steel guitar, Jon Estes on bass and Jon Radford on drums. The effect of this line-up and probably the environment in which it was recorded, is best evidenced by tracks such as 1970 In Aspic and Time Coast which both lend themselves to elements of psychedelia and the ‘Southern influences’ of Nashville.

Mad Shelley’s Letter Box and Autumn Sunglasses are two characteristic Hitchcock tracks with a surrealist narrative set to the sort of riffs and melodies that many would kill for while the jaunty Detective Mindhorn is inspired by a film of the same name co-written by Hitchcok’s friend Julian Barratt of ‘The Mighty Boosh’.

Possibly the most touching song on the album is Raymond and the Wires, a track about childhood memories of his father, Sci-Fi writer and cartoonist, Raymond Hitchcock. Somehow the reflective tone seems to sit well alongside, and shine through, the kaleidoscope of themes that Hitchcock delivers in this superb collection.