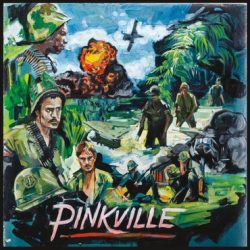 This is Rod Melancon’s fourth album, produced by Adrian Quesada and Will Walden and recorded in Austin Texas. Prepare to be astounded and moved by music that growls at you from The South. The title track is spoken by Rod against a haunting drum, cymbal, and Will Walden’s guitar. Vivid memories of his own childhood in Louisiana: “the Mermentau River,” “the old grey faded house,” and a man with PTSD, “walking back and forth in a daze,” as it turns out, a damaged veteran of the Vietnam war whose confused mind was still “far off in the burning villages of Pinkville.” A shocking episode of the War, the My Lai Massacre (March 1968) was called Pinkville by the American soldiers there. Rod’s introduction to the album captures and entrances the listener completely, and this sense of purpose holds true to the last track.

This then is an American collection of history, places and people. The second track, written by Tom Waits, and sounding just like him, continues, and firmly reinforces this tradition. There is the use of American iconography: a reference to an “Olds 88,” an acknowledgement to authority, “My Parole officer will be proud of me.” And memorable statements of masculinity: “I got hair on my chest…” Rod is continuing a strong tradition!

Track 3, ‘Westgate’ is poised perfectly. Here is a standout, anthem-like, rocking, heart-swelling song that itemises and appreciates “The bottom drawer of the town I grew up in.” There are references, to “Lisa,” with her “Blue Oyster Cult t-shirt,” a conversation with “Officer Robicheaux,” and a movement in time, to 2004, sitting in a tank in Afghanistan and still “thinking of Lisa!” It can’t get much better than this, can it? Yes, it can. Just listen to Will Walden’s guitar at this point reinforcing the story being told!

The fourth track, ‘Rehabilitation’, is a story of attempting to come to terms with life, and not succeeding. Rod is showing a deeper understanding that frightens the listener with the picture given of the end of the story: “I can still see his face/ When they broke down the door/ Just a ghostly white figure / Lifeless on the floor.” Memorable storytelling.

‘Corpus Christi Car Wash’ is a pointer to the enlightening variety of subject material within this collection. This episode, in fact, is the true story of Freddy Fender who once worked at a car wash in Corpus Christi, on the Gulf Coast,150 miles north of the Mexico border. In the song, Rod Melancon is quoting from Freddy: “Wasting my days and nights there,” and “Before the last teardrop falls!” Both title tracks of his.

The next track, ‘The Heartbreakers’ is dedicated to Tom Petty, telling the story of “the little white boy” with “long blonde hair and a big wide grin,” and refusing to believe it, when “Radio said Tom Petty was dead,” because, “like Rock ‘n’ Roll, Tom Petty will never die!”

‘Lord Knows’ is a Western story of tracking down the sheriff who killed his brother. The sheriff is found in Mexico and the tale ends with a shoot out where both men are killed! The inevitabilities of life are enveloped in the title and the ending: “The Bible read son, thou shalt not kill/ But for my family name/ Lord knows I will”.

And that’s this remarkable album’s theme really: what this life, and your world throws at you, and do the best you can. Take ‘Manic Depression’ -Upbeat, a reference to “Echo Park” in the scruffy Eastside of Los Angeles and feeling low there, meeting people, including “A blue haired girl” who was “toxic and mean,” “Got green eyes and a sense of self/ Pleased to meet you/This is my manic depression!”

Welcome to the world with up-tempo, impressive music. ‘57 Channels’ written by Bruce Springsteen is perfect here, buying a gun “in the blessed name of Elvis.” And the last track ‘Cobra’ really is a conclusion, dying of a gunshot in Mobile, Alabama deciding with Will Walden’s powerful guitar dominating, holding you: “Which is worse/ Dying slow or being born?”

Seldom is it that a listener is so enthralled by so much that America can put before you, and let you decide for yourself.

A rich, unforgettable album with a perfect title