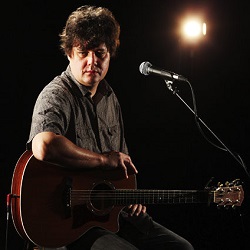 Late spring London was showing off its finery on an exceptionally warm evening, whilst Lori Cullen was inside the Islington Assembly Hall as opening act for Ron Sexsmith, singing her light jazzy songs – some of them co-writes by her husband and Ron (who provided the lyrics) – that make up her new album. The inattentive and chatty audience aside, it’s the perfect gentle scene setter for the main man. Ron Sexsmith is, of course, a songwriter deep in the tradition of the craft – if I was the kind of person who used the phrase I might say Old School – hell, he even has a slide show from a genuine slide projector to accompany his set. Taking the stage formally dressed in a dark suit, he’s instantly at home, setting off with It won’t last long, the opening track of his excellent new album The Last Rider. It’s a song choice which seems designed to confirm his crown as the prince of melancholy, a slow ballad predicting the eventual departure of another’s lover with “take it from a friend who’s been around / Soon you’ll make it to the end I know”. The tempo picks up with the knowingly self-deprecating titled Late Bloomer, which starts to show off the band’s rockier tendencies, as well as Sexsmith’s lyrical turns and a gorgeous chorus which sounds uncannily like it has been borrowed from Midlake.

As well as having a new album out, Sexsmith noted that this year is also the twentieth anniversary of Other Songs, which was as good a reason as any to pepper its tracks throughout the set. Pretty Little Cemetery shows off one of Sexsmith’s true strengths as a songwriter – he can write about his family, about walking with his son, and just doing everyday things and make those songs something beautiful and beyond anything as simplistic as intimate. It’s a side of life that precious few songwriters can handle without coming off as saccharine, or just simply botching the job. Not so Sexsmith – there’s something touching and human about lines like “there’s an old couple on the bus sitting next to us, my boy and I / And pointing to the graveyard My boy turns to the old man and says / “this is where you go to when you die. My papa told me so” / The old man said “yes, we know” “. It’s painfully poignant and totally innocent at the same time – and that doesn’t happen by accident. Following this up with the upbeat The Idiot Boy totally vindicates those occasional comparisons to the much missed Harry Nilsson. Jaunty, and sarcastic, a three minute put down for the human race.

During a wonderful solo set mid way through the gig – although one or two band members did come out to add a little support – there were more new songs, such as Sexsmith’s farewell to Toronto Man at the gate (1913), as well as old favourites like Strawberry Blonde. This latter is such an acutely observed song shot through with an unwaveringly positive nostalgia for childhood scenes, even as it unfolds an unhappy story of family dysfunction. It conjures up its time and place perfectly with just exactly the right number of carefully husbanded words – if Ray Bradbury had written songs he’d have written songs like Strawberry Blonde.  And alongside all this lyrical perfection there are songs like Radio which rocks along as, on the surface, mildly nostalgic for a lost golden age of music radio mixed with digs at the auto-tuned six-songwriters four producers dialled in instrumentation modern pop music scene, but there’s also surely another subtle message of political criticism “The shameless and the appalling / Have sunk things to a new low / What has become of the world we used to know ?”. There’s also time for Long Player, Late Bloomer‘s caustic put down song Get In Line, which again ties itself to a lovely melody – including accordion accompaniment – whilst staunchly rejecting anyone’s right to chip in their criticisms “I never meant for your flowers to wilt / nor to sour all your sweet wine / If you mean to shower me with guilt / Better get in line”. So, sure Ron Sexsmith is the prince of melancholy if you ignore his role as a documenter of family, of life and love, a shrugger off of pointing fingers and a dealer himself of subtle critiques. Prince of melancholy? Not so much really – and if anyone still needed convincing Brandy Alexander is a love song which is as upbeat and uptempo as anyone could ask for.

A wonderful evening then of great songs, an excellent band and an engaging singer-songwriter at the controls. The songs from The Last Rider are as good as anything that has gone before. The man himself – well he comes across as genuinely a nice guy – and whilst nice is often seen as a mildly disparaging description it has to be recalled that Sexsmith is Canadian so, you know, Canadian nice. The warmth of his music clearly has a wide appeal – and this was the second of two nights at this midsized London venue. There are occasional expressions of what might be called career frustration – the latest single, Sexsmith says by way of introduction, “went to number 2 in the charts”. The small cheer is cut off as he adds “Not here, of course, here it can’t get played. In Ireland. They must know something in Ireland, right ?”. Damn right Ron, they certainly must.

So long
Man at the gate (1913)
Autumn Light
Strawberry blonde