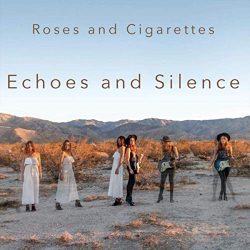 Some albums are like a good malt whiskey – they need to be sipped, savoured, delighted in and make you want another one or two – or in the case of an album, listened to again and again at your leisure. And the new album from Roses & Cigarettes ‘Echoes And Silence’ is precisely one of those.

The follow up to their ‘Acoustic Sessions’ EP is very well produced, played and sung – although occasionally it doesn’t quite hit the spot. It starts very well with the poppy ‘Fast As I Can’ with its superb harmonies from Jenny Pagliaro and Angela Petrilli, the Californian duo who are Roses & Cigarettes. It’s a shame that’s the only track that really makes full use of the pair’s excellent harmonies and a few of the other songs veer into Sheryl Crow and Susan Tedeschi hard rock territory which isn’t necessarily a bad thing.  There’s also the country-flecked ballad ‘Stranded’ that features the soulful voice of Marc Broussard, which is probably the stand out track with its subtle use of pedal steel and fiddle. The other track that deserves a mention is ‘Love Song’ (not the most original title) which is a strong ballad with a country lilt featuring piano and fiddle that is ripe for covering by a Nashville based singer or two; I hope their publisher is on the case!

There are a couple of songs that meld into each other with heavy guitar riffs and power ballads that are a bit anonymous but they’re the exception; the other tracks are all superb. There’s also a cover of ‘Bye Bye Blackbird’, the 1926 Henderson/Dixon song that over the years has been recorded by everyone from Dean Martin and Johnny Mathis to Joe Cocker and Paul McCartney. Here the duo do a great job of slowing it down and giving new meaning to a well-loved standard

The album ends on a strong note with the ballad ‘Whispers To The Wind (Stacie’s Song)’ with its lush strings, acoustic guitars and mournful vocals.

‘Echoes And Silence’ is a superb, eclectic mix of country, rock, Americana with even some straight up pop thrown in for good measure. It’ll go well with a wee dram or two.

An excellent mix of rock, pop, country and Americana