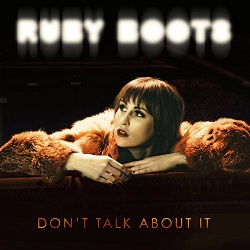 Ruby Boots – real name Bex Chilcott – throws a handful of dust into the eyes on the opening two tracks of Don’t Talk About It, which come out of the blocks running, and punching out in a glam-rock way. It’s So Cruel stomps all over the leather clad tough talker who’s a little backward at coming forward, much to the chagrin of Ms Boots who suggests “we got a spark but it’s not quite a fire / let’s get it burning with a touch of desire”. Even meeting his ex-wife, and his girlfriend, doesn’t do much to cool her ardour. Over fuzzed up guitars and stomping drums he eventually gets the idea. Some guys. Believe in Heaven equally rocks out along a pleasingly straightforward trajectory. By which time the listener thinks they’ve got Ruby Boots sussed. Bad girl. Rocking Bad Girl. Glam rock, Debbie Harry territory. Well…perhaps some of that is a bit of a front as the third song in Don’t Talk About It is a dreamy rock ballad, taking Ruby Boots through the unavoidable changes connected with a romantic breakup. There’s tubular bells, there’s a purring guitar with twanging rockabilly licks. Next up, Easy Way Out, is a Learning to Fly style Pettyesque song, with acoustic rhythm guitar driving it forward as if Jeff Lynne was in the control room driving the mixing deck.

There follows on a series of ballads, love lorn and musically gentler compared to the album’s opening songs. Don’t Give a Damn takes a slight diversion into Phosphorescent territory – a low-fi opener that grooves into some nice guitar licks and piano and organ lines. It’s a funky track. And just when it seems we’ve finally got a handle on Ruby Boots, she goes and throws a near a cappella song, I am a Woman, into the mix. Backed with just a faint echoey organ, Ruby Boots shows off her vocal range, rising and swooping and asking the question “I am a woman, do you know what that means ?  You lay it all on the line when you lay down with me”. It’s very pure and simple, and also very unexpected.

Don’t Talk About It is, then, a varied album which shows off both Ruby Boots’ range of styles and the genre-crossing capabilities of her backing band – who just happen to be The Texas Gentlemen whom Ruby had hooked up with in Nashville whilst they were on the way to a gig backing Kris Kristofferson. For her they become a modern day Wrecking Crew, playing whatever the songs demand and making each song convincing. Don’t Talk About It is, in short, an excellent album.