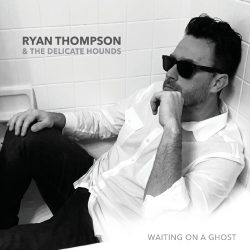 The debut album from Sacramento-based Ryan Thompson delivers country-infused Americana that showcases his solid song-writing skills. In his own words, Thompson says: “I did not spend my twenties on the music scene, trying to make a name for myself.” Indeed, this selection of warm, mid-tempo songs is informed by a life lived and the time taken to discover his sound; years spent in indie-rock and honky-tonk bands have influenced and honed Thompson’s creative output.

The production by Max Hart, who has worked with the likes of War on Drugs and We Are Scientists, is excellent with clear layers of instrumentation and the bass high in the mix, creating a pleasantly rhythmic feel to the whole album.

The record begins strongly with the twanging guitars and deep bass rhythm of ‘Stop!’. The track offers three minutes of sunny, poppy Americana. The song exposes the unfairness of a relationship in which the narrator gives more than he gets. Enough is enough and it’s time for the balance to be addressed: “I don’t mind / If you don’t mind / That I don’t care at all / I can’t prepare for your warfare / It was never fair at all.” This sense of finally finding his voice and saying what he means, this weary voice of experience, is Thompson asserting himself from the start. He shows some song-writing guile in using the word ‘Stop!’ to punctuate and pause the music and to end the song. It is an effective opener and the song-writing continues to be consistently solid throughout the album.

Next up is the title track, ‘Waiting on a Ghost’, which is gently rhythmic with a strong bass line and a catchy vocal. Here, the narrator is waiting for a lover who is unlikely to return home. Although the dream is hopeful, he knows it’s futile, hence waiting on a ‘ghost’. The guitar solos seem to mirror and answer the vocal melody; this is a technique employed again on other songs, such as ‘The Gift’: when the solo kicks in, it builds on and grows out of the established melody organically, inhabiting and enhancing the songs rather than feeling like something added on. It’s evidence of a mature song-writing style, complemented by Thompson’s clean, clear voice that effortlessly travels with the listener.

There are songs that are very clearly influenced by country, such as ‘Here I Go Again’, in which the downbeat lyric is at odds with the jaunty, upbeat instrumentation and rhythm: “…Breaking when I should bend / I’ve given all I’ve got / There’s no more of me to lend.” Another up-tempo country track is the escapist ‘Tucson’. Thompson is clearly comfortable in this territory.

One of the album’s highlights is the timeless tune, ‘Dreaming and Wishing’. Once again, there’s a strong beat, provided by a snappy snare drum, and a lovely vocal. When Thompson sings: “I know it’s wrong for me / To believe in destiny / I know it’s wrong the way I live,” perhaps he’s singing about himself and his late journey into music. The song has the pleasing feel of old-fashioned pop from decades past. Another notable song is ‘Sunrise’, on which the subtle backing reinforces the delicate vocal melody, building tension through the verses that is then released in the chorus: “I can see the sunrise / When I look past your eyes / And I can’t wait until it shines through.” Also, ‘Long Way Down’ stands out for the stronger sense of character and more detailed narrative than most of the other songs; perhaps this is something that Thompson could develop in the future as that detail and context on this and ‘Tucson’ can draw the listener in more fully and effectively.

‘Finish Line’ provides an appropriate ending to the album. It begins with a heavier sounding guitar riff and then the song builds as the percussion and other instruments kick in. There are some smart lyrics: “You’re a smoker. I’m a quitter. / Let’s leave our conscience behind. / You’re the patch on my left arm. / I’m the addiction in your mind.” It rocks out the album nicely with a couple of powerful guitar solos. On his next record, Thompson could throw in a few more rockier tracks like this to vary the mood, tone and pace.

Throughout, there is a clear sense of identity and a cohesive mid-tempo sound, based around pleasing vocal melodies and twanging guitars laid over strong, swaying bass lines. It’s a solid foundation on which Thompson will continue to build.