This collaboration between decade veterans Session Americana and Jefferson Hamer, perhaps best known this side of the pond for his “Child 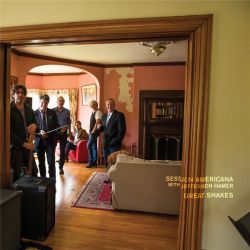 Ballads” album with Anais Mitchell, opens up with the little gem that is “One Skinner”, a languid, gorgeously melodic song that slides into your consciousness and never leaves.  It’s followed up with “Helena”, which sounds exactly like UK cult heroes Diesel Park West with its West coast jangle and Hamer’s vocal being a dead ringer for John Butler’s and is none the worse for it.

It has to be said that these are the two best tracks on the album but the remaining eight songs display an impressive command of early seventies country and AOR (and that isn’t meant as a criticism).  It’s all very loose and laid back, the sound of veteran musicians having a good time, and it’s hugely enjoyable to listen to.  Hamer’s plaintive vocals on the likes of “Great Western Rail” add a yearning elegiac edge to the songs and stop things from getting too cosy.

There’s nothing unexpected here, just the standard Americana tropes being whipped around, but it’s done well, in fact better than well, and as such would be a welcome addition to any fans’ shelves.