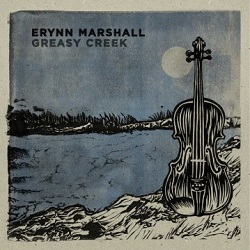 Erynn Marshall is probably best known for playing in the Haints Old-time String Band alongside fellow Canadians Pharis and Jason Romero.  Having relocated to Virginia, Greasy Creek sees her forging a solo path for her highly respected fiddle playing, alongside many other collaborators, but still staying firmly in that Old Timey vein. This is pre-bluegrass music, so when there’s banjo accompaniment it’s claw hammer or three-finger, but not Scruggs, style. It’s music redolent of the turn of the century – the late nineteenth century into the early twentieth century that is – and mostly reflects a range of dance styles. There’s the proto-jazz of Decatur Stomp which conjures up visions of a stompin’ vaudevillian entertainment, there’s the fast but just about square-danceable Old Barn with Marshall’s fiddle competing with Bob Carlin’s banjo as to who’ll get to the finish line first. Then there’s the more sedate but still vibrantly down-home Bass Cove Waltz which at least lets the old folks get a turn on the dance floor.

Marshall’s husband, Carl Jones, pops up quite a bit across the album, adding one or more of guitar, mandolin and banjo-mandolin on ten of the twelve and a bit tunes – there’s a “hidden” bonus track, the rather gorgeous and lilting Jacqueline’s Dream. The title track is also a little gem, a swampy mix of fiddle and banjo, but the infectiously joyful Laughing Girl, with what feel like a few Celtic touches here and there, is perhaps the star of the set. Anyone who has any love for Old Timey fiddle led instrumentals is sure to find a lot to like on this rather prettily presented album.

If the devil came down to Virginia, then on the evidence of this album Erynn Marshall would give him a run for his money.