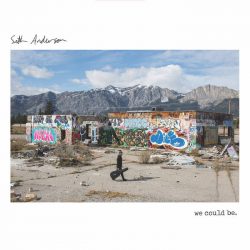 When you looked at the picture on the front of this album it makes you recall that there was a time when the cover art of a vinyl album could be attractive or distinctive enough to at least make you stop, if not buy – obviously, that was the idea.  The ‘Run-down Gas Station’, photo on the front of this offering had the same effect; eye-catching and intriguing – just what a cover should be.

Gas stations, or petrol as we might say, and roads seem to be very much part of Anderson’s self-concept and his biography recounts 15 years on the road here, there and almost everywhere given that a proposed visit to Britain this summer is now almost certainly cancelled. His music is described as folk-rock though there are times when the rock is more evident than the folk. Anderson’s music is said to be in the spirit of John Moreland, Chuck Ragan and Frank Turner.

“Most of these songs are reminders to myself about how I want to live, and the kind of person that I want to be, but I hope they inspire other people as well, or help others, to live the life that they would love to have”.

Anderson is a native of Canadian East Coast New Brunswick, most likely a maritime experience?  He now lives in Alberta nearer the West than East and firmly ensconced in the Rockies (check out some of the mountainous, snow-laden, online videos).

Anderson’s co-conspirator on this album is Eamon McGrath and apparently, much of the original recording was completed in his living room. There is though a considerable cast of other musicians who have helped in this production.

This is a guitar-driven album though on a couple of occasions other instruments do come to the fore. On, ‘We Could Be’, there is Cello, on, ‘Finding Bliss’, effective use of what is described as a Marching Band Drum, and on, ‘As a Ghost,’ and, ‘Don’t Stop’, a keyboard features. For the rest, it’s either the up-tempo guitar and drums of the opening track, ‘Drive Alone’, or acoustic tracks such as, ‘All We’ll Ever Need’, with just voice and Guitar. Perseverance with some instrumental diversity might be something that would add extra layers of interest to Anderson’s music.  The Cello, for instance, works very well.

Variety is a great thing and if nothing else there are sufficient changes of mood and tempo on this album. Preferable are the more restrained tracks such as, ‘Finding Bliss’, ‘Don’t Stop’, ‘My One Belief’, ‘All you’ll Ever Need’. The opening rocker, ‘Drive Alone’ might be the weakest on the album and it was during this track and similar that I found my attention wandering, though that’s not difficult in these blighted times. Perhaps the suggestion might be more folk less rock which would also give more space for Anderson’s appealing voice to bloom?

Lyrically familiar areas are visited; love, the search for truth and meaning, father and son relationships, life on the road and its ups and downs. Two that caught the eye as well as the ear, were, ‘Finding Bliss and ‘Your Son’.

‘Finding Bliss,’ is a tale about the need to escape and be yourself and free from society.  It’s, ‘Your Son, that contains perhaps the best couplet on the album.

All in all a bit of a mixed bag. There are guitars aplenty and it may be that you will decide whether you prefer them plugged or unplugged. There is some instrumental variety and maybe more would add to the interest. The songs generally tread limited ground in terms of subject and content, but there are signs that the possibility of the next level of really good, thought-provoking writing does exist.

A mixed and varied set with something for all