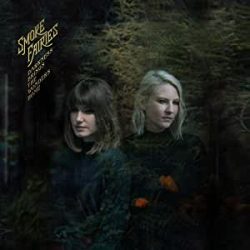 ‘Darkness Brings the Wonders Home’ was recorded by the South London based duo, Smoke Fairies during a month-long sojourn in Seattle in conjunction with producer Phil Ek. The album is a departure from the earthy folk of their earlier work such as 2011’s ‘Through Low Light and Trees’ to a more rock orientated sound with tight harmonies floating over hypnotic electric guitar riffs. The repetitive guitar riffs feature as part of a homogenous soundscape which is augmented by a saturating bass and unobtrusive percussion.

The real strength lies in the harmonies that are at times exquisite. Whilst the homogeneity is undoubtedly a strength it also mitigates against creating contrasting moods which might show some of the tracks in a better light. The mood that is generated is one of introspective melancholy and at times dark places intimated by the minor keys that have been utilised.

Tracks such as ‘Out of the Woods’ and ‘Chew Your Bones’ explore fears of the unknown whilst ‘Don’t You Want to Spiral Out of Control’ leans towards more concrete anxieties about relationships. ‘Coffee Shop Blues’ reflects upon a year the duo spent living in New Orleans where they may well have absorbed some of the darker moods that permeate this southern city.

‘Darkness Brings the Wonders Home’ repays several listens by which time some of its subtleties begin to reveal themselves. Listened to in its entirety, the melancholy tone of the album is both its strength and its weakness. The listener is entering a soundscape that won’t change from track to track which can ultimately feel like an experience that wants for more.