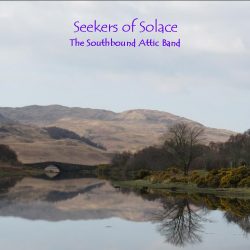 Up and down the country there are any number of unsung musical outfits. Most never play further than twenty miles from home and they’ll never win an award or be featured in a broadsheet (or even a music magazine). But they do it for love (heaven knows there’s no money) and a lot of them produce some fine music along the way. Liverpool’s acoustic outfit the Southbound Attic Band, aka Barry Jones and Ronnie Clark, are a fine example of these unsung heroes and their fifth album has a baker’s dozen songs that you’d be more than happy to run across (and then run across again).

There’s a nostalgic and elegiac thread running through songs like the powerful The Fair, the heartfelt and nakedly emotional epitaph Song For Stan (from which the album’s title is taken) and the gentle Promised Land. On the other hand the duo don’t take themselves too seriously either (check out the very much NSFW Rime Of The Open Micer for the evidence) but in the main these tales of ordinary people and their lives and loves, sung and played in a simple unadorned style, will strike a chord with pretty much everyone.