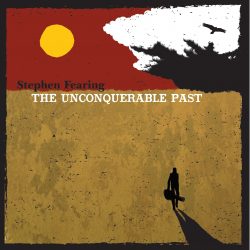 With his thirteenth solo release, Canadian singer/songwriter Stephen Fearing, takes stock – not only of his own life – but he also zooms out to make broader observations. Fearing is best know as a founder member of Canadian alt-country outfit Blackie and The Rodeo Kings, but he has a magnificent back catalogue in his own right. Throughout his thirty-year career Fearing has established himself as a consummate musical storyteller, and ‘The Unconquerable Past’  is a fitting testament to that achievement.

As the title suggests, what is done is done so “intrigued by the unknown” he sets his sights on what is to come.

Supported by producer and co-writer Scott Nolan, Fearing steps lightly between carefully layered arrangements to sparse solo reflections that match the sheer expanse of their recording surroundings in Winnipeg. ‘Americana’ and ‘folk’ come to mind, but Fearing transcends labels, as do many of his fellow Canadian artists, to make his music his own. Getting close are fellow countryman, William Prince or just over the border, Rod Picott.

In ‘Break Our Mother’s Heart’, Fearing admits the life of a troubadour comes at a price: “you can leave the ones you love but you can’t leave the past behind”. In his rich flowing voice he looks back on what can’t be changed, maybe with regret but never self-pity. He continues his nomadic theme on ‘Gold On The River’ but to deepen his musing he stretches his voice with more accompaniment, including some lovely pedal steel.

There is a sense of reckoning in ‘Marie’ as Fearing warns of the damage wrought by those hiding behind “tinfoil hat religion”. He wrote most of these songs just before recording so it is not difficult to identify his “s..tstorm”.

Empathy is a characteristic Fearing frequents. ‘Sunny’ tells of a mother’s sensitivity towards her son. Though the music throughout this record is excellent Fearing makes his most powerful statements with just his guitar and voice as in ’Someone Else’s Shoes’ where he moves from the personal to a broader plea for greater tolerance generally.

Though born in Canada Fearing spent his childhood in Dublin (where among his schoolmates were some future members of U2), before moving back across the Atlantic. Whether drawn from his own experience  ‘Emigrant Song’, co-written with Andy White, shows Fearing identifying with anyone seeking a new life in North America. Between them, Fearing and White blend folk from the new and old worlds.

Deservedly, Fearing has won many awards and he has collaborated with some very big names, yet as a solo artist his profile remains understated. Perhaps that is by design but ‘The Unconquerable Past’ confirms his future will be every bit as accomplished as all he has achieved so far.

An album of compassionate reflection both inwards and outwards

0 thoughts on “Stephen Fearing “The Unconquerable Past” (Fear & Loathing Music, 2019)”