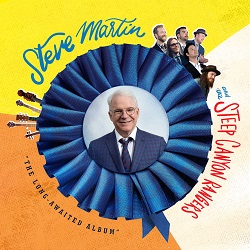 The Long Awaited Album is Steve Martin’s sixth and a half album of banjo music, his initial foray being the B-side of The Steve Martin Brothers way back in 1981, with the first full album being 2009’s all-star collaboration The Crow. This was followed up with
Rare Bird Alert, an album which also featured The Steep Canyon Rangers as his backing band – they’d been supporting him out on tour as well. The Long Awaited Album sees Steve Martin cementing his relationship with these musicians – whose own career has flourished alongside Martin’s “late bloomer” musical outpouring – in that it features his more light-hearted approach to Bluegrass. Of course there’s a long history of humorous – but seriously played – banjo music going all the way back to Stringbean and Grandpa Jones, and beyond into the mostly unrecorded prehistory of 19th century playing.

There’s some clawhammer present on The Long Awaited Album, but it is mostly bluegrass. Some is Greenbluegrass – Martin is a master recycler. So Familiar and Always Will were songs Steve Martin recorded with Edie Brickell, but here the full complexity of the playing is focused on, and they are great instrumental tunes. This, of course, is nothing new – The Crow also re-used the best tunes from The Steve Martin Brothers. With all his other accomplishments it seems hardly fair that Steve Martin should also be both an accomplished and a distinctive Bluegrass player – but he is. Martin produces tunes which hint at New Grass origins with a touch of the Tony Trishka’s about them – hardly surprising as Martin is a longtime playing buddy of Trishka. New Grass is now a more than forty year old movement, which is rather ironic – and many of Martin’s songs are also ironic. Those that are not are quirky, except for the pure instrumentals. When it comes to singing Steve Martin will typically reach for lyrics with an off-kilter setting – so a love song sees love blossoming between “biologists in a laboratory” or the humorous potential of breakups is explored as on Caroline which foresees a list of unsuccessful dates to come in the impossible search for a new love to replace the lost perfect girlfriend.  However, on the tunes where Steve cedes lead vocals – such as on Canadian Girl – the humour is toned down and the writing becomes far more observational, with a side order of the philosophical. These songs take the country sound of Bluegrass into the 21st century – adding a pleasing urban, and urbane, tone.

The Long Awaited Album is an excellent example of the combined sound of Steve Martin and his backing/collaborating band of choice. Truthfully one or two of the songs don’t fully hit the heights, but there’s a joyful spirit running throughout. The playing is great – and that’s a big slice of what really matters.

Steve Martin’s music career continues to flourish, and truly the wild and crazy guy has got some fine banjo fingers.

About Jonathan Aird 1344 Articles
Sure, I could climb high in a tree, or go to Skye on my holiday. I could be happy. All I really want is the excitement of first hearing The Byrds, the amazement of decades of Dylan's music, or the thrill of seeing a band like The Long Ryders live. That's not much to ask, is it?