With the imminent release of a new EP and a seven-week tour coming up, Zoe Nicol and Rosie Jones of Worry Dolls will be keeping busy this autumn. The pair met in Liverpool while studying music and soon discovered that their voices, multi-instrumental talents and song writing skills were well-matched. They have been writing and performing together ever since. Worry Dolls are a lesson in following your dreams: Nicol and Jones made the difficult decision to leave their old lives behind and move to Nashville, where they recorded their well-received debut album, ‘Go Get Gone’. Their song, ‘Endless Road’, was nominated for Song of the Year at the Americana Music Association UK Awards and they have been championed by the likes of Bob Harris. So, anticipation is high for their new EP, ‘The River’. After the new song was showcased brilliantly at The Black Deer Festival, Americana-UK caught up with Worry Dolls just before the single’s release to find out more about the inspiration and song writing process. END_OF_DOCUMENT_TOKEN_TO_BE_REPLACED

The first names have been announced this morning for the americana and country festival Black Deer’s 2019 line up, and there are some belters on there. In a victory for equestrians, South Califonia’s Band of Horses have been confirmed as the first headliner, with other artists announced including Australian roots-rockers the John Butler Trio, Northumberland’s Jade Bird, Canadian bluegrass and hillbilly folk band the Dead South, Oscar-winning Ryan Bingham and Old Crow Medicine Show’s guitarist Chance McCoy. END_OF_DOCUMENT_TOKEN_TO_BE_REPLACED 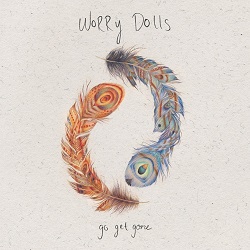 Rosie Jones and Zoe Nicol, who together make up Worry Dolls, are that rare thing – songwriters who are genuinely living their lyrics. Go Get Gone‘s title quoting track is the carpe diem song Train’s Leaving which boldly encourages with “forget the doubts still troubling your mind no “what if this” or “what if that” / No coulda bins or coulda haves / Farewell, so long, go get gone”. Get out there, and take life by the scruff of the neck, no regrets, no missed chances. And real life has seen the duo up-sticks from moderate success in London and take their catchy country vocals out to Nashville for a shot at the big time. END_OF_DOCUMENT_TOKEN_TO_BE_REPLACED