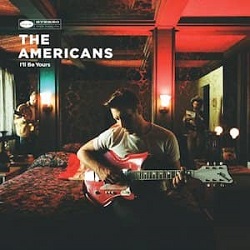 With a CV as long as your auntie Susan’s shopping list, The Americans certainly win the prize for putting in the effort: previously serving as the backing band for Luncinda Williams, Nick Cave and Courtney Love at the David Lynch Foundation’s 60th Anniversary of Allen Ginsberg’s Howl, they have also recently made friends with Jack White, T Bone Burnett and Robert Redford to land a spot in the forthcoming PBS documentary series American Epic (airing on the BBC from 16 May 2017).

Musically, the band and their third album (if you include the sprawling soundtrack they put together for Michael Mann’s movie, Texas Killing Fields) are difficult to define. Their sound is often harsh and primitive, overwhelmed by dirty overdriven guitar in homage to Link Wray, but with a tendency toward the deliberately rough-edged cerebralism of Bruce Springsteen or Tom Waits.

Opening track Nevada, for instance sounds as though it could have been written for the band by Springsteen himself, whereas the breathtakingly soulful Bronze Star balances the bands knack for grit with brilliantly spacious production (a little like that of the first Grant Lee Buffalo album). Elsewhere the band drift between gravelly, growling blues (more ill-fitting and less convincing) and slightly peculiar acoustic balladry (the title track, for instance, beautiful in part, sounds a little like two songs butted together).

I’ll Be Yours is a puzzling, meandering record which at times seems to lose its way. The constituent parts are in part often startlingly good, but the parts are more definitely easier to consume than the album as a whole.

A record that has you reaching for the skip button in order to find (and repeat) the best bits.